The new millennium was ushered in with the conviction that innovation in life sciences, especially biotechnology, will play a transformative role in making India a knowledge economy. The optimism was palpable and several ventures emerged during the period spanning 2000 and 2002 to translate this dream. That was when I moved from Mumbai to Hyderabad to head the newly formed ICICI Knowledge Park (later renamed as IKP Knowledge Park, IKP), the first life science park in the country, founded by ICICI Bank with support from the then State government of Andhra Pradesh. But, before reminiscing about the evolution of the life sciences startup ecosystem since that time, a few trendsetters that created a fertile ground for change, need to be recognised 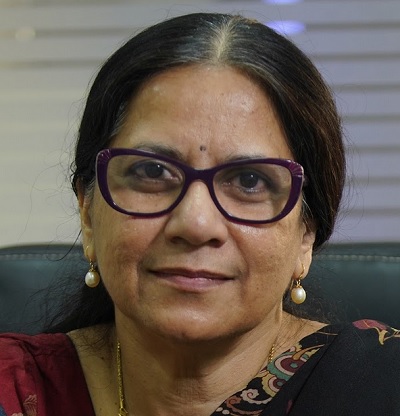 When Astra Zeneca’s R&D Centre (erstwhile Astra Research Centre India, ARCI) became operational in 1987 near the Indian Institute of Science (IISc) campus in Bangalore, it created an open innovation environment that helped bioscience researchers gain industrial R&D exposure. ARCI could be called the first biotech incubator in India that helped spawn startups like Bangalore Genie, Xcyton and Gangagen, and later Aristogene, Cellworks and Enzene. In 1993, when Dr. Varaprasad Reddy founded Shantha Biotechnics, it was briefly incubated at Osmania University, Hyderabad and then at the Centre for Cellular & Molecular Biology (CCMB). Shantha Biotechnics went on to produce India’s first domestically developed rDNA product – Shanvac-B, a recombinant hepatitis B vaccine, at less than a dollar a dose when the same was globally sold at $23. Companies like Advanced Enzymes, Biocon, Biological E, Praj, Serum Institute of India (SII) among others were making their own mark in the biotech field. Bharat Biotech, that indigenously developed the COVID-19 vaccine, Covaxin, started operations in Hyderabad in 1996. Two institutions that funded technology innovations during these times were TDICI (ICICI Ventures), the first Venture Capital Fund set up by ICICI and UTI in 1988, and the Technology Development Board, DST, GoI, set up in 1996 to fund commercialisation of indigenous technologies. Globally, the Human Genome Project was causing huge excitement regarding advances in medicine and biotechnology.

This was the setting when a number of startup icons began their entrepreneurial journey between 2000 to 2002. Four computer science faculty from IISc led by Prof. Vijay Chandru started Strand Genomics (later Strand Life Sciences), the first bioinformatics and medical genomics company in India, in 2000. In the same year, Anuradha Acharya co-founded Ocimum Biosolutions, another trailblazing bioinformatics startup. Prof. J. Ramachandran launched Gangagen to develop novel therapeutic proteins targeting infectious diseases. Dr. K. K. Narayanan and Dr. Gautham Nadig left their corporate research jobs to start Metahelix Life Sciences focusing on crop protection and productivity. Dr. Villoo Morawala Patel founded Avesthagen and delved into the agbiotech and nutraceuticals opportunities. Dr. Ramanan Laxminarayan, founder, Healthcube, Bigtec co-founders Chandrasekhar Nair and GM Kini, and Dr. Bala Manian of Reametrix focused on developing innovative, affordable point of care medical diagnostics. Dr. Sudhir Jain left Ranbaxy to start Concord Biotech in fermentation-based APIs. ChemBiotech, GVK Bio and Sai Life Sciences augmented the Contract Research space where Syngene had already started functioning. These entrepreneurs came with deep domain expertise and have been a guiding force for the next generation of startups. The journey of these iconic startups are rich with lessons. Many of these businesses succeeded in developing unique scalable models. All of them raised capital at a time when biotech venture funding was rare in India. Some of them faltered, several pivoted, got acquired and the entrepreneurs went on to start one or more new ventures.

Several ecosystem level developments were simultaneously happening during this time. Andhra Pradesh, Gujarat and Karnataka had set up state level VC funds. AP, Karnataka and Tamil Nadu came up with state biotech policies; biotech parks were set up, including the Jubilee Women’s Biotech Park in Chennai, focussing on women entrepreneurs. BioSpectrum was launched in 2002; the Association of Biotech Led Enterprises (ABLE) was launched in 2003. The New Millennium Indian Technology Leadership Initiative (NMITLI) of the Department of Science & Industrial Research, GoI was launched in 2003 to fund innovation projects.

The second wave of bio and medtech entrepreneurship came with the Department of Biotechnology (DBT), GoI setting up the Small Business Innovation Research Initiative (SBIRI) scheme in 2005. The product IP regime was introduced in India in the same year. Some notable innovative companies founded during this period are Stempeutics Research, VLife Sciences, Anthem Bioscience, Inbiopro Solutions. The Stanford India Biodesign (SIB) programme of DBT, in partnership with AIIMS, IIT Delhi and Stanford University in 2007 started clinical immersion programmes for engineers and shook up the medtech startup space. This got further fillip from global partnership programmes like the Affordable Healthcare in India fund of Wellcome Trust, UK, the Indo-US Endowment Fund, Grand Challenges Explorations (GCE) of the Bill & Melinda Gates Foundation (BMGF) and Grand Challenges Canada. A special GCE was launched by BMGF in India in 2011 with IKP as the partner, which later on expanded as the DBT-BMGF Grand Challenges-India initiative. With grant funding and guidance from Indian and global mentors, young engineers, clinicians and researchers found an alternate path to channelise their talent to innovate for social impact.

The growth of biotech startups in India however really began with the launch of the Biotechnology Industry Research Assistance Council (BIRAC) in 2012. Pioneered by DBT under Dr. M K Bhan’s vision, BIRAC became a vehicle to both leverage government funding to derisk technology development and also develop the ecosystem with partners. The Biotechnology Ignition Grant (BIG) scheme with liberal grant funding drew innovators from across all fields of biotechnology to develop the proof of concept of their ideas. BIG has so far supported over 750 startups and innovators from across India, many of whom went on to raise substantial follow-on private capital. Fig 1 shows that the number of startups supported through BIG as a percentage of the total number of biotech startups has decreased from 23% in 2015 to around 14% in 2021.

This seems to point to the critical role BIG played in reducing the risk perception of early-stage funding of biotech startups, thereby attracting funding from other donors, friends and family, as well as angels and early stage VCs. The success of partnering with biotech incubators for the BIG programme led to deeper engagements with the incubation community. The BIRAC Regional Innovation Centre (BRIC) at IKP mapped the innovations across life sciences clusters, and helped BIRAC formulate targeted programmes to promote entrepreneurship. This led to the setting up of three more BIRAC Regional Centres, at C-CAMP, Bangalore and Venture Centre, Pune for entrepreneurship development and at KIIT TBI, Bhubaneswar for capacity building in the North East Region. The DBT and World Bank funded National Biopharma Mission helped revamp infrastructure and innovation capacity, including setting up Regional Tech Transfer Offices to ensure translation.

The StartUp India action plan of 2015 brought startups to the centre stage. NITI Aayog, central government ministries as well as state governments launched a plethora of initiatives around incubation and seed stage funding. As per the Startup India website there are around 790 incubators in the country of which around 226 have biotechnology as one of their domains. The total number of DPIIT registered startups in February 2022 is around 63,800 and roughly one-tenth of that would be in the life sciences space. ABLE puts the number of biotech startups at around 5,400 at the end of December 2021. As of 2021, over 17% biotech startups are from outside the established clusters (Fig 2). 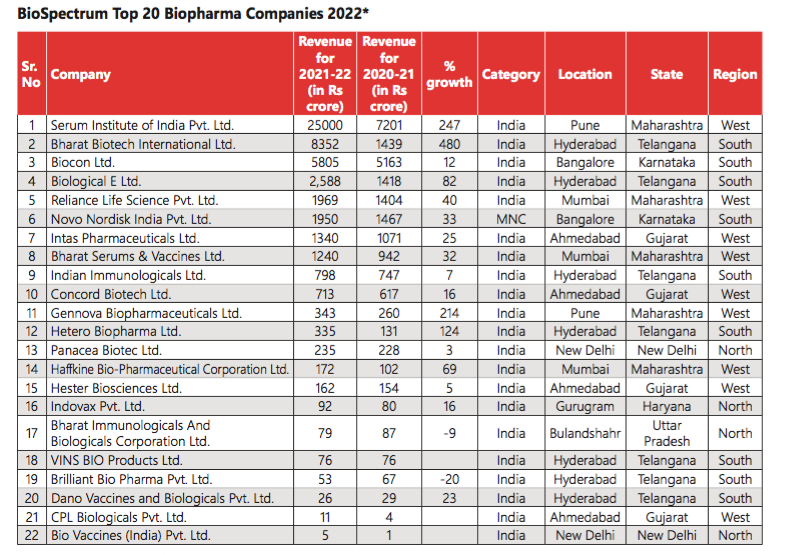 Covid19 Turbulence and the Response of Indian Biotech Startup Ecosystem

COVID also tested the agility of the Indian innovation ecosystem, and especially the biotech ecosystem, and it passed the stress test with aplomb. From breaking silos and collaborating to solve problems, to shrinking development, validation and manufacturing timelines to meet the requirements of diagnostics and vaccines, the startup ecosystem walked in step with regulators and industry to deliver. The investment community, incubators, corporates, donors and the government rolled out several funds at lightning pace. More than a dozen groups worked on non-invasive ventilators and those for ICUs. The story of the ICU ventilator developed at IIT Kanpur is well known. Huwel Life Sciences was quick to gauge the supply chain issue of its imported reagents and started developing these in their own labs along with the RTPCR test kit for COVID-19. Pune based Mylab, the first company to receive ICMR approval for COVID-19 testing and also developed a home based rapid test is supported by Mr. Adar Poonawala, Chairman, SII. Mylab has entered into a strategic tie-up with Shilpa Biologicals from Dharwad for manufacturing of vaccines and therapeutics. I must hasten to add that these are just some examples and there must be at least a hundred startups that need special mention.

A startup journey is akin to that of a river. It starts small and along its path gains strength through investments and acquisitions, very much like tributaries and at times hives off/or an employee quits to grow independently. This goes on till it itself merges with a dominant river or the sea (IPO). Many streams also die before reaching another river. Estimates are that 80% of the streams on the planet are first to third order headwater streams.

To judge the evolution and maturity of a startup ecosystem my three indicators would be if:

The story of Dr. Reddy’s and Biocon are well known as ecosystem creators. Laurus Labs, that started as a 3-member pharma API startup at IKP Incubator in 2006 has grown to become a fully integrated pharmaceutical company with market cap of around US$3.8 Billion. In 2020, Laurus acquired Richcore Life Sciences to foray into Biotech and in 2021 took a minority stake in ImmunoACT, an advanced cell and gene therapy startup from SINE, IIT Bombay. This is a happy trend of a maturing startup ecosystem. I look forward to many more such examples in this decade of deep science and deeptech innovations around digital health, personalised medicine, biomaterial, sustainability, climate resilience and one health.