Looking beyond vaccines to fight SARS-CoV-2

It is difficult to predict how much protection vaccines will confer us against the new and future variants, but we should avail the full benefits from them, because they may reduce the disease severity & deaths from the infections. A foolproof treatment to restrict it from proliferation or killing may take time because new drug development is time-consuming and also unpredictable. 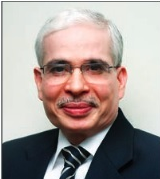 We are all aware of the re-infections people are experiencing after having been fully recovered once from SARS-CoV-2, and also the severe infections and eventually deaths of people who had taken the full course of the vaccines, developed based on the knowledge available on the genome sequencing of the spike protein; thus suggesting that the seroconversion provided by natural infection or vaccines does not confer the desired long-term protection. These findings are further substantiated by recent reports concluding that not all who got infected develop neutralising antibodies to SARS-CoV-2. For example, the studies conducted by scientists in Germany confirmed that 85 per cent of people who came in contact with SARS-CoV-2 positive individuals did not develop antibodies against the virus. A similar study from Israel finds that 5 per cent of COVID-19 patients, confirmed by RT-PCR, did not seroconvert. So, the million-dollar question is: Are the existing vaccines redundant?

More recent studies conducted by the Centre for Disease Control & Prevention (CDC) have suggested that even younger people with lower detectable levels of virus, are unlikely to seroconvert instilling doubts about the vaccination as a foolproof approach to curb the pandemic and pushing the need for a long-term remedy to protect the masses from serious infection and eventually deaths due to SARS-CoV-2.A report published in The Economist on August 3, 2021, estimates that the true number of COVID-19 death toll may be more than 15 million, and the recent surge in infections in the US, Australia, China, South East Asia etc., is mainly due to Delta-variant, which is equipped to evade the protection confer by existing vaccines. The UK, where more than 50 per cent of the population is fully vaccinated, is also going through a similar threat.The strong selective pressure created by an infection acquired as well as vaccine-induced immunity is the known factor for the emergence of the new, yet more infectious, variants and it is reasonable to accept that the new variants, namely Delta or Mu will not put full stop on the emergence of yet more infectious versions. The increased infectiousness and also the capacity of evading the human immune system confirms that there is more than spike protein mutations, which made Delta-variant different from its predecessors, and this is the subject of the present note!

The understanding so far

The studies carried out by Krogan’s group at the University of California brings a new knowledge that > 50 per cent greater infectiousness of α-variant is not the result of a mutation in the spike protein, as one might have thought, but due to Orf 9 b, the protein present in large amounts and has high affinity for one of the host proteins; Tom 70. The latter is vital for triggering the human innate immune system. Tom 70 also interacts with a mitochondrial membrane to initiate the desired antiviral response, if infected by SARS-CoV-2. The inactivation of Tom 70, as the result of its interaction with Orf 9 b, gives the virus an opportunity to grow uninhibitedly in the infected host cells. The raised levels of two more proteins, identified as Orf 6 and N, in the virus are known to antagonise host immunity and may be supportive to its increased infectiousness.

With the absence of Orf 9b and also the understanding that only 7 out 18 mutations known so far in eight proteins of SARS-CoV-2 are in spike protein, one can easily infer that the cause for the high virulence of Delta-variant is due to something different than observed in α-variant and also lies outside of the spike protein.

Based on the knowledge developed by his team, Krogan hypothesised that it could be simply because of some changes in the regulation of the expression rates, rather than the viral protein sequences themselves, producing proteins similar to Orf 6&N, observed in the α-variant, in large amounts (Chem. World, 10, Aug. 2021). It is important to remind here that the vaccines developed so far for COVID-19 work by eliciting antibodies against the spike protein of the original, so-called, Wuhan Virus strain, and may not yield immune response against the viral proteins present in the new variants and also those produced in abnormal amounts for securing its survival and making it more infectious!

A vaccine that is made from attenuated or deactivated virus, such as COVAXIN, developed by Bharat Biotech or CoronaVac developed by Sinovac may also not be effective, if the virulence is either because of overproduction of a particular viral protein, such as Orf 9 b, or Orf 6 or N, observed in the case of α-variant!

Krogan believes “It’s not just that we vaccinate & we are done; we need many parallel strategies to combat it.” He feels that the way new variants are finding ways to remain relevant by becoming more infectious, the best approach could be to shift the focus to the host and target one of our proteins that the virus needs, making viral mutations irrelevant as far as the protection from this infectious virus is concerned, but is easier said than done!!

It is difficult to predict how much protection vaccines will confer us against the new and future variants, but we should avail the full benefits from them, because they may reduce the disease severity & deaths from the infections. The permanent solution, however, will be possible only when we have a method to detect the infection at its outset, well before the virus travels down to infect vital organs. A foolproof treatment to restrict it from proliferation or killing may take time because new drug development is time-consuming and also unpredictable. Mutations are the key especially for RNA viruses to sustain the evolving human immune environment; however, since virus persistence also depends on a host to survive, there is a limit to go. On the other hand, some of the mutations may prove detrimental to viruses, thus giving us a hope that sooner or later SARS-CoV2 will either get redundant or slow down, as happened with other viruses in the past.

However,our immune system is strong enough to give complete protection (Cell, May 2021), as substantiated by uncountable numbers of senior citizens emerging out as winners against COVID-19.We can trust and keep in good shape by simply modifying our lifestyle, behaviour and habits to continue living a healthy life, even though this virus is likely going to cohabit with us forever.