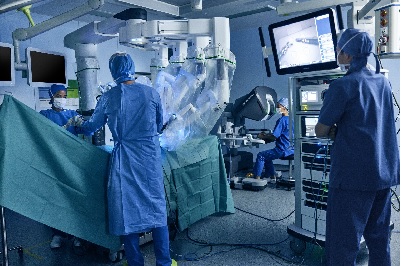 Surgical robotic systems are now available all over the world, including India and are increasingly being utilised for a variety of surgical procedures. With a greater focus on standardisation of surgical steps, structured training of surgeons and increasing awareness of the patient benefits of a robotic surgical approach, the scope and implementation of this treatment modality is likely to skyrocket in the coming years.

In urology, the surgical robots were first utilised when Imperial College of London developed PRO ROBOT for assisting in transurethral prostatectomies. The next advancement in robotic surgery was in 1994 when FDA approved Automated Endoscopic System for Optimal Positioning 1000 (AESOP 1000) as a laparoscopic camera holder. This was used in 17 different procedures like nephrectomy, retroperitoneal lymph node dissection, varix ligation and Burch bladder suspension. The next robot was the ZEUS which became commercially available in 1998. AESOP 1000 introduced the idea of telepresence and a 3D imaging feature along with the capability for the surgeon to sit in a console. In the year 2000, the da Vinci system got US FDA approval. It had robotic arms, a 3D imaging system and binocular endoscopic vision. Over the last two decades, this system manufactured by Intuitive has led the way in transforming the way surgery is performed all over the world and has ushered in an era of ‘high tech’ surgery in all fields, including uro oncology.

Robotic radical prostatectomy has many benefits over conventional prostatectomies, like decreased blood loss and rate of blood transfusions along with a shorter duration of hospitalisation. The robot provides better visualisation and understanding of the pelvic anatomy due to 3D view and 10 times magnification. It gives an enhanced dexterity to work in the small pelvic space as compared to open surgery and laparoscopic surgery due to seven degrees of freedom. Due to the above advantages, the urinary sphincter complex and the nerves around the prostate are likely better preserved, which will lead to better recovery of urinary control and sexual function after surgery.

After radical prostatectomy, RAS was introduced for other urological tumours. As compared to open surgery, robotic kidney surgery offers benefits of minimally invasive surgery such as early discharge and lesser postoperative pain. The main limitations during a pure laparoscopic approach to a partial nephrectomy was a lack of wristed instrumentation during the removal of kidney tumours and suturing for reconstruction. These obstacles precluded most urologists from adopting laparoscopy for partial nephrectomy. Robotic technique benefited urologists and patients alike, as it made dissection and intracorporeal suturing easier. The robotic approach is superior to that of open and laparoscopic partial nephrectomy in terms of lesser blood loss, decreased length of hospital stay and lesser postoperative complications and makes it possible for a greater number of patients to preserve their kidneys and get back to their normal lives faster. This can potentially decrease the need for dialysis in the long term and can help people lead longer and healthier lives.

As compared to prostatectomy, radical cystectomy is a challenging procedure as patients with bladder cancer are generally older and frail. The robotic surgical technique can potentially decrease the complication rates and hasten the recovery of these vulnerable patients. As compared to open surgery, this approach has been shown to have a similar ability to eradicate cancer while providing the benefits of minimally invasive surgery to the patient. It is also possible to reconstruct a new bladder completely via robotic surgery (intracorporeal orthotopic neobladder) allowing the patient to regain near-normal urinary function even after removal of cancer afflicted bladder.

The application of robotic techniques in surgery for urological cancers has expanded at a great pace in the last decade. The da Vinci Surgical System has led the way in technological innovation and is the most commonly used robotic platform. The clinical use of such new robots will surely enhance the use of this technology for the benefit of the patients.