Thalassemia in Pregnancy- A High Risk

Regular pregnancy checkups are mandatory in these patients 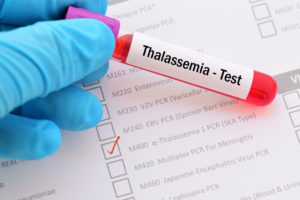 Thalassemia refers to a group of autosomal recessive disorders of haemoglobin manufacturing. It is of 2 main types. Alpha and Beta

As Thalassemia presents with a typical type of anaemia, a simple CBC test with particular attention to a certain parameter such as MCH can be the first screening test in pregnancy for carrier status. Once the couples carrier status and genetic mutation are confirmed, they should be counselled that the risk of thalassemia major is one in four. Definite fetal diagnosis can be carried out using chorionic villous biopsy. Unlike beta-thalassemia which will show up only after birth, a fetus with alpha thalassemia manifests signs of anaemia from early gestation on USG

The treatment for thalassemia like availability of iron chelators, detection of iron overload, has advanced significantly leading to higher life expectancy in patients with Thalassemia. Women withthalassemia are entering well into the reproductive age group and hence the obvious desire for them is to get pregnant and have a child.

Pregnancy is considered to be more possible in thalassemia intermedia rather thal major as the latter is associated with significant fertility issues. Several pregnancies have been reported in thalassemic women which is possible with successful management in pre conceptional phase and during gestation. Pregnancy in Thalassemia major is complicated with oxidative stress, cardiac, hepatic, endocrine and metabolic complications and hence pregnancy in thalassemic women should be managed by a multidisciplinary team including cardiologist, endocrinologist, obstetrician, andhaematologists specialized in the treatment of thalassemia.

Regular pregnancy checkups are mandatory in these patients. Haemoglobin should ideally be maintained at 10mg/dl and above to facilitate normal fetal growth

These pregnancies should be managed with careful blood transfusion, chelation therapy if only benefits are higher than risks and thromboprophylaxis as these women have a higher risk of developing Deep vein thrombosis and another fatal thrombosis.

Pregnancy in thalassemia should be considered as “ HIGH RISK” pregnancy and only a careful specialized continuous preconception, antenatal and postpartum management by an expert team can lead to a favourable outcome.