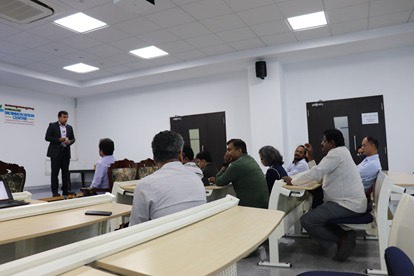 In an effort to create a platform between big and established Biotech Industry players and the startups, Bangalore Bioinnovation Centre (BBC) conducted a town hall meeting between the representatives of Sun Pharma Advanced Research Company (SPARC) and startups being Incubated at BBC.
Dr Jitendra Kumar, Director of BBC, during the meeting stated that there are difficulties to secure early stage venture funding for Biotech startups and it may be more meaningful that established Industry partners with the startups to develop the Technologies/Products. Through these partnerships, startups can get access to capital, mentorship and vast resources of an established player.
Dr Rajesh Ranganathan and Dr Alpana Dey from SPARC made the presentation to a curated set of startups at BBC. Startups also pitched before the SPARC representatives.
Dr Ranganathan stated that he is very excited about this partnership as BBC provides a large platform where more than 100 startups are being incubated. He also stated that SPARC would like to lease out some laboratory space in BBC to tap into its world class facility as well as to interact with startups in real time.
Director, BBC added that BBC would invite other Industry players in a regular manner to partner with startups being Incubated at BBC.