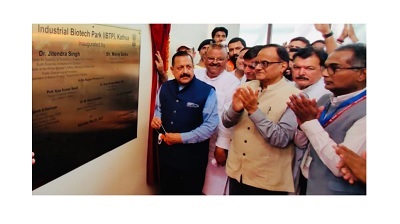 Dr Singh said, the biotech park would act as a hub for incubation of new ideas and will act as a robust platform to support the agri-entrepreneurs, startups, scientists, scholars and students not only from Jammu & Kashmir and Ladakh but also from nearby states of Punjab, Haryana and Himachal Pradesh.

Dr Jitendra Singh said that the biotechnology park at Kathua has the potential to produce 25 startups in a year which will be among its great contributions to this region.

Dr Singh also said that the work on the two industrial biotech parks, one at Ghatti, Kathua, Jammu and the other in Handwara, Kashmir jointly funded by the Department of Biotechnology, Government of India, Ministry of Science & Technology and Jammu & Kashmir Science, Technology & Innovation Council was started in February 2019. CSIR-Indian Institute of Integrative Medicine, (CSIR-IIIM) Jammu has been entrusted with the responsibility of implementing the project.