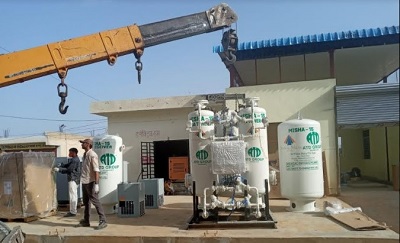 UK-based conglomerate and a leading public health emergency management solutions company, SRAM & MRAM Group, has set up the second oxygen plant in Nawalgarh town in Jhunjhunu district of Rajasthan, after installing its first plant in Kuchaman (Rajasthan), earlier this month.

Dedicated to supporting India with the maximum contribution, SRAM & MRAM along with ATD Group is committed to bringing in 1 million oxygen concentrators and 40 generators to help India fight the contagious virus. The group has been working actively to set up 60 plants in India, and now along with ATD Group, the company has successfully installed its second plant at Nawalgarh (in Jhunjhunu district), which will be operational by this week.

Speaking on the progress, Vandana Rao, SRAM & MRAM Group quoted, " We are thankful to the Rajasthan government for its constant support and our team which has been working around the clock to support the country fight with the pandemic."

Commenting on the development, Shailesh Anandani, ATD Group said, “We are delighted to announce our successful installation of the second oxygen generator plant in Nawalgarh. With our committed team and support of the state government, we are dedicated to build strong health infrastructure and support the nation with employment during the time of crisis.”