This method developed by CSIR-CCMB is a simple variation of the existing gold standard RT-PCR method and can easily scale up the testing by 2 to 3 fold with no new investment of resources. 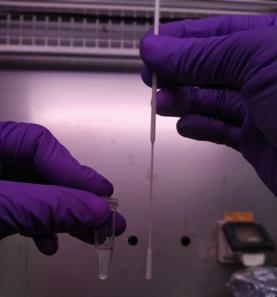 The simple and fast method of Dry Swab-Direct RT-PCR, developed by CSIRs constituent lab Centre for Cellular and Molecular Biology (CCMB) Hyderabad for scaling up of SARS-CoV-2 detection has now been approved by ICMR based on their independent validation. This method developed by CSIR-CCMB is a simple variation of the existing gold standard RT-PCR method and can easily scale up the testing by 2 to 3 fold with no new investment of resources.  After evaluating this method and finding an overall concordance of 96.9 per cent, ICMR has now issued an advisory for the use of CSIR-CCMB dry swab method, considering its lesser cost and quick turn-around time.

More specifically, the Dry Swab-Direct RT-PCR method involves collecting and transporting the nasal swab in dry state (as opposed to using the viral transport medium VTM) which makes the transportation and handling of the samples easy and less prone to spillage and spread of infection. Secondly, the step of RNA isolation from the sample is omitted and involves only simple processing of the sample followed by direct RT-PCR using the kit recommended by ICMR. Omitting the step of RNA isolation offers a huge benefit over the conventional method, as the RNA isolation is a major bottleneck in terms of time, cost and trained manpower. Given this, with the same resources and no additional cost more samples can be tested and can be easily scaled up at least 2-3 times immediately.

Significantly, the modified method of CSIR-CCMB has also been independently corroborated by multiple premier institutes and hospitals such as Centre for DNA Fingerprinting and Diagnostics (CDFD), IISER-Berhapmur, CSIR-NEERI, GMCH-Nagpur, Genepath based in Pune, IGGMSH and MAFSU, Nagpur and also Apollo Hospitals, Hyderabad. Further, this modified method has been published in peer reviewed journal by CSIR-CCMB and by other scientific groups in several prestigious scientific journals across the world.