UCL reviewed 28 studies from China, US, France, South Korea and the UK 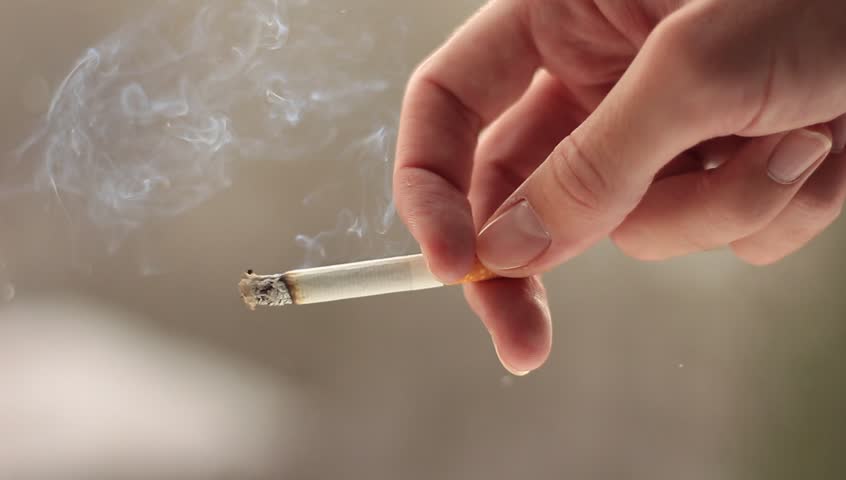 A review of scientific studies has added more evidence to the claim that people who smoke might have a lower risk of becoming seriously ill with COVID-19. University College London academics looked at 28 papers and found the proportions of smokers among hospital patients were 'lower than expected'.

One public health professor said there was 'something weird going on with smoking and coronavirus' and experts are struggling to explain the connection. One of the studies showed that in the UK the proportion of smokers among COVID-19 patients was just five per cent, a third of the national rate of 14.4 per cent.

Another found in France the rate was four times lower. In China, a study noted 3.8 per cent of patients were smokers - despite more than half of the population regularly smoking cigarettes. When smokers do get diagnosed with the virus, however, they appear to be more likely to get so sick that they need ventilation, two studies in the review showed. Researchers admit that hospitals are probably not recording patients' smoking status properly, potentially because they are too busy, patients are too sick to answer, or because people lie in their answers. But they are struggling to knock down mounting evidence suggesting an apparent protective effect given by cigarettes, which one expert admitted was 'weird'. A review of five early studies on the topic last month made the exact same conclusions - that smokers may avoid serious infection, but their outlook is worse if they do.

Twenty-two of the studies were conducted in China, three in the US, one in South Korea, one in France and one was an international study using mostly UK data.  Only three of them split smoking status into three parts - current, former and never smokers. The other 25 only reported current and former smoking status, but there were questions around how many of the rest had never smoked, and how many had missing data. Notwithstanding these uncertainties, compared with national prevalence estimates, recorded current and former smoking rates in the included studies were generally lower than expected. Data from the US suggests that smokers appear to be less likely to test positive for SARS-CoV-2 compared with never smokers.

Rather than this reflecting likelihood of catching the virus in the first place, it is more likely to point to someone's risk of becoming so ill they have to go to hospital. Most of the countries involved in the studies did almost all of their testing in hospitals. But the researchers noted that smokers were more likely to be tested, possibly because their symptoms, like a cough, are more obvious due to their habit. 'We would therefore caution against drawing any conclusion as to whether smokers are at increased risk of SARS-CoV-2 infection at this early stage,' the UCL team said. Two high quality studies provided zero evidence that the 657 current or former smokers with the virus were at a higher risk of ending up in hospital. But among 1,370 people hospitalised across two other studies, smokers were 43 per cent more likely to see their disease progress to become severe than those who had never smoked. Three studies reported death rates from COVID-19 but there 'did not appear to be a notable difference' between smokers and non-smokers. However, the studies 'did not explicitly state never smoking status', the authors said.

They implied that patients who died may have smoked in the past, but this was not clearly recorded by a doctor. The authors concluded there is a lack of evidence that meets a high standard to definitely say whether or not smokers are at higher risk of catching the coronavirus, or having poor outcomes.

Commenting on the matter, Linda Bauld, a professor of public health at the University of Edinburgh, said 'there's something weird going on with smoking and coronavirus'. She told Good Morning Britain: 'We know for decades that smoking is linked to a higher risk of developing respiratory conditions and also people who smoke have poorer outcomes. 'And we've still got around seven million smokers in the UK, [the] leading preventable cause of death. 'However, my colleagues at UCL... what they’ve found is there are surprisingly few smokers in those studies who’ve developed coronavirus. 'In one French study, four times as many non-smokers got the virus and developed COVID-19 compared to smokers.  'There is a potential biological explanation for this.'

Professor Bauld said the way the virus enters the body may be blocked by effects of nicotine - the addictive compound found in tobacco. The coronavirus enters cells inside the body via structures called ACE-2 receptors, which coat the surface of some cells, including in the airways and lungs. The numbers of ACE-2 receptors someone has are thought to vary depending on genetics and some evidence suggests that they are higher in smokers. This could, in theory, put them at a higher risk of contracting the coronavirus.

However, the virus is known to cause lung damage by depleting the numbers of ACE-2 receptors, so the fact that smoking increases them could reverse the effect and prevent harm to the lungs. On the other hand, other studies show that nicotine reduces the action of the ACE-2 receptor, suggesting smokers are less likely to catch the virus in the first place.

Professor Bauld said, 'It's plausible that smokers are less likely to develop the condition potentially because of nicotine. Importantly in that UCL review where smokers did develop COVID-19, their outcomes are far worse.'

What did the studies from each country show?

In the South Korean study, 18.5 per cent were current smokers, which almost matches the smoking prevalence of 19.3 per cent in 2016.

In the included study conducted in France, 7.1 per cent were current smokers, 6.1 per cent of whom were hospitalised. But much higher smoking rates are recorded in the population -  32 per cent.

However the results were different for former smokers, of which there are 31.4 per cent in France. A much higher 59.1 per cent of COVID-19 patients were former smokers.

In the international study with participants predominantly from the UK in a hospital setting, five per cent were current or former smokers.

This compares with a current and former smoking prevalence of 14.4 and 25.8 per cent in England in 2018, 'suggesting a lower than expected proportion of current and former smokers in the included study'.  Typically, smokers are at a heightened risk of infection because the tiny hairs inside the airways and lungs, which help move pathogens and mucus away, are often damaged by the toxic chemicals in cigarette smoke. In theory, this would put smokers at a disadvantage if they catch coronavirus, considering the disease leaves patients unable to get enough oxygen into the bloodstream due to lung inflammation.

Research has shown smokers do face a greater risk of suffering complications - but others suggested they were less likely to be infected in the first place. That was the finding of the first large review of evidence by a team led by Harvard's Dr Constantine Vardavas, Greece, published in the journal Tobacco Induced Diseases.

The team reviewed five studies in March and said so far say the proof smoking raises the risk of coronavirus is limited, after finding as little as 1.4 per cent of hospitalised patients were smokers. The group of experts even admitted warnings made by health chiefs were based mainly on assumptions, given the known infection risks of smoking.

A study published earlier this month by scientists in New York and Athens looked at 13 Chinese studies that had registered smoking as a precondition and found that the number of smokers across the whole sample of 5,300 patients was 6.5 per cent. It's an astonishingly small number in country where half of all men still smoke.

Another study, by America's Centers for Disease Control of over 7,000 people who tested positive for coronavirus, found that just 1.3 per cent of them were smokers - against the 14 per cent of all Americans that the CDC says smoke.

The study also found that the smokers stood no greater chance of ending up in hospital or an ICU.

Governments in both the UK and US urge people to stop smoking to protect themselves from the virus as a matter of precaution, while scientists admit there is no clear proof cigarettes can worsen the disease.

Recently, world-famous artist David Hockney wrote a letter to the Daily Mail saying: 'I used to joke that being a smoker in Malibu was the equivalent of being a non-smoker in Pasadena. They used to have very bad pollution there.

'Could it not be that smokers have developed an immune system to this virus? With all these figures coming out, it’s beginning to look like that to me.'

The British artist, now 82 and living in France, adds 'I'm serious' and has in the past revealed he's smoked for more than 60 years but still considers himself healthy.

Meanwhile, a British NHS doctor claimed today that Prime Minister Boris Johnson was so severely affected by coronavirus because he is 'significantly' overweight.

Consultant cardiologist Dr Aseem Malhotra said there is a ten-fold risk of death from the disease - which has so far killed more than 20,000 Britons - if patients are obese.

He pointed out that other 'slimmer' members of the Cabinet - like Health Secretary Matt Hancock - recovered much more quickly and were not hospitalised. Other top Government officials and advisers who have recovered from the virus include Chief Medical Officer Chris Whitty, Chief Adviser Dominic Cummings and Health Minister Nadine Dorries.