Mansukh Mandaviya steps in as new Health Minister of India 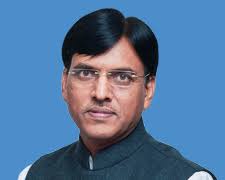 In the reshuffle of Prime Minister Narendra Modi's Cabinet that underwent a reboot today, Mansukh Mandaviya has got the charge of Health Ministry. He will also be holding charge of the Ministry of Chemicals and Fertilisers.

The Health and Family Welfare Ministry was earlier being held by Dr Harsh Vardhan who was reportedly asked to resign ahead of the cabinet reshuffle. He was widely criticized for mishandling the COVID-19 situation and the second wave, in particular.

A total of 43 political leaders have been sworn-in as union ministers, and some are promoted.

In a tweet, the Prime Minister said, "I congratulate all the colleagues who have taken oath today and wish them the very best for their ministerial tenure. We will continue working to fulfil aspirations of the people and build a strong and prosperous India."

A mixed response towards this cabinet reshuffling is doing the rounds in the media. On one hand, optimism is setting-in with this development, while on the other, questions are being raised whether Dr Harsh Vardhan has been made a scape-goat of the PM's failures.