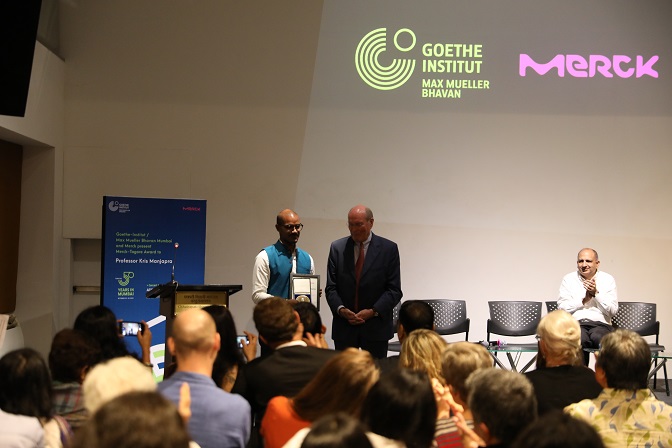 Merck, a leading science and technology company, has announced that it has presented Kris Manjapra with the fourth Merck-Tagore Award for his contribution towards intercultural exchange between India and Germany. Manjapra is awarded for his book, “The Age of Entanglement: German and Indian Intellectuals across Empire” (Harvard Historical Studies), with which he explores patterns of connection linking German and Indian intellectuals from the nineteenth century to the years after the Second World War.

Dr. Frank Stangenberg-Haverkamp, Chairman of the Executive Board and the Family Board of E. Merck KG, handed over the award to Kris Manjapra, at a glittering event organised as part of the anniversary celebrations of the Goethe Institute, Mumbai.

Addressing the audience in Mumbai, Stangenberg-Haverkamp, said, "Merck is all about scientific exploration and pathbreaking technologies. However, scientific progress and technological innovation depend on curious minds, on inspiration, on an open exchange of thoughts and ideas across borders and cultural boundaries. Literature greatly helps to achieve exactly this. It can build bridges across cultures and support novel ideas to transcend across borders.”

The jury consists of the Goethe-Institut / Max Mueller Bhavan, the Consulate General of the Federal Republic of Germany in Mumbai, Dr. Martin Kämpchen (winner of the first Merck Tagore Prize) and Merck India.

The Merck-Tagore Award was created in 2012 to honour the life and work of Rabindranath Tagore. During his visits to Germany, the Indian Nobel Laureate represented India as an ambassador and appealed for better understanding of India and its culture.

The Merck-Tagore Award was granted for the first time during the events marking the Tagore Year of the Goethe-Institut / Max Mueller Bhavan Kolkata in March 2012. It is granted every two years on or around Tagore’s birthday, to a person who has made a special contribution to cultural exchange between Germany and India.

In 2012 the award was granted to Dr. Martin Kämpchen, the well-known writer on Indian culture, translator of Tagore and Ramakrishna from Bengali to German and journalist. The 2014 Award was granted to Prof. Dr. Pramod Talgeri, renowned former head of German at JNU Delhi, former head of EFLU Hyderabad, vicepresident of the Indian Goethe-Association, and acting president of the Indo German teachers association. Indian psychoanalyst and writer Sudhir Kakar was the recipient of the third award in 2016.

Kris Manjapra is an associate professor of history at Tufts university. He received his doctorate from Harvard University in 2007 and joined Tufts history department in 2008. His work adopts postcolonial and critical perspectives on the study of race, colonialism, diaspora and capitalism.