Dr Srinubabu is a distinguished scientist, and an entrepreneur with post doctorate from Stanford University. 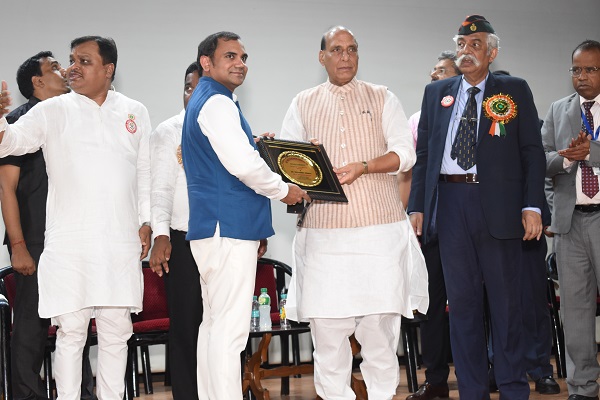 Hyderabad based scientist, entrepreneur and philanthropist Dr Srinubabu Gedela received “Pride of the Nation Award” 2019 from Rajnath Singh, Minister for Defence, in recognition to his untiring social services and healthcare services to the Nation.

Union Minister for Defence presented the Pride of the Nation Award to doyens of different fields at an event organised by ‘Veterans India’ on the occasion of Kargil Vijay Diwas, in New Delhi on Sunday.

After receiving the award Dr. Srinubabu said "For a scientist turned entrepreneur, this is the proudest moment. The Pride of the Nation award motivates me to further, endure my mission to deliver social and healthcare services for the nation I have undertaken, and I hope it gives a positive message to all.”

Dr Srinubabu is a distinguished scientist, and an entrepreneur with post doctorate from Stanford University. He is the CEO of Pulsus, managing seven SEZ Units with 5,000+ employees from Hyderabad, Chennai, Gurugram and Vishakapatnam. His corporation is engaged in healthcare and health informatics meetings, and in a publishing business in over 50 countries creating thousands of jobs for young life sciences graduate.

Dr. Srinubabu credited for bringing healthcare, agricultural information to the remotest corners of India in their preferred language with no cost to service.

As a philanthropist Dr. Srinubabu has undertaken many initiatives including supporting over a Lakh (1, 00,000) families during TiTli Cyclone in Andhra Pradesh by providing basic needs like Rice bags blankets, Sari / Dhoti to each affected family. His ongoing project include a healthcare services venture in Uttara Andhra which will pave way for 10 lakh job creation.

This Pride of the Nation award follows Dr. Gedela several international awards, including “Champions of Change" in 2018 given by Shri M. Venkaiah Naidu, Vice President of India in last December. The award is given to people who ushered in refreshing changes in their districts through their commitment, dedication, creative interventions and innovation.