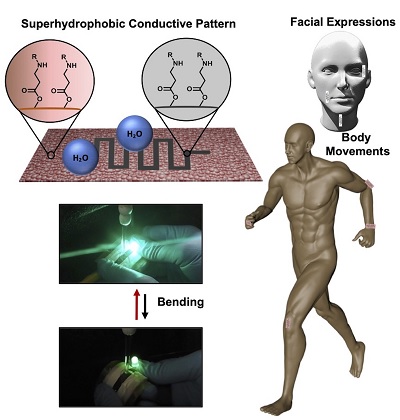 Indian Institute of Technology Guwahati (IIT-G) researchers has developed a novel water repellent material that can be used for real-time monitoring of human movements.

The material developed is flexible, non-stretchable and environmentally friendly that can detect low strains with high sensitivity. The team has developed such a material that is superior to existing strain sensors for both sensitivity and durability.

The researchers have developed a metal-free, chemically reactive, and conductive ink, which they deposited on a chemically reactive paper in a specific pattern. The patterned interface developed by the IIT Guwahati team was found to be tolerant to abrasion, highly water repellent, and sensitive to low strain levels.

Dr Uttam Manna, Associate Professor, Department of Chemistry, Centre for Nanotechnology and School of Health Science and Technology, IIT Guwahati said, “The ink-patterned paper was connected to an electronic component and a Bluetooth module and attached to various parts of the human body for wireless monitoring of different human motions and expressions. It was attached to the finger to detect bending motion, knee to detect walking and squatting motions and to different parts of the face to detect facial expressions.

The unconventional interface developed by the IIT Guwahati team holds promise for development of devices in in healthcare.