Could help study how the brain develops, particularly the neurons 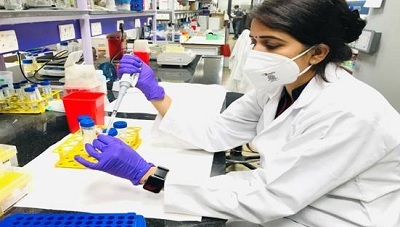 Dr Yogita K Adlakha has developed human-based models to study neuron development and neurodevelopmental disorder such as autism which can help design treatment strategies for such brain disorders.

A recipient of INSPIRE Faculty fellowship instituted by the Department of Science and Technology (DST), Dr Yogita has generated a human-based stem cell model to understand brain development and dysfunction at the National Brain Research Centre, Manesar, Haryana. Currently, she works as a Scientist at Translational Health Science and Technology Institute, NCR biocluster, Faridabad.

Along with her research group, she established a protocol from India for the first time by generating and producing induced pluripotent stem cells (iPSCs) from human peripheral blood. They have further refined the protocol of differentiation of iPSCs into the brain-specific stem cells, i.e., neural stem cells (NSCs).

Dr Yogita has developed a human-based model that could help study how the brain develops, particularly the neurons, and what goes awry during brain development leading to cognitive decline, impairment in language, and social interaction.

“My research using DST INSPIRE fund has contributed to expanding the knowledge of neuron development and neurodevelopmental disorder such as autism and the role of small non-coding miRNA in brain-specific stem cells fate,” adds Dr Yogita.