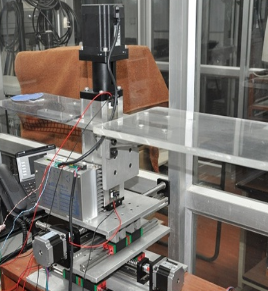 A group of scientists at the Indian Institute of Technology (IIT) Kanpur and Sanjay Gandhi Postgraduate Institute of Medical Sciences (SGPGIMS), Lucknow has developed a novel and cheap 3D robotic motion phantom that can reproduce the lung motion of a human during breathing.

The phantom is part of a platform that not only emulates the human lung motion as a patient is breathing but can also be used to check if the radiation is being correctly focussed on a moving target.

The phantom is placed inside a CT scanner on the bed in place of the human, and it emulates human lung motion as it is irradiated during therapy.

During irradiation, consistently high-quality images of advanced 4D radiation therapy treatments are obtained with minimum exposure of the patients and workers. Before the targeted radiation is delivered to a human subject, its effectiveness in focusing only on the tumor is checked with this phantom.

This is the first time in India for manufacturing this type of robotic phantoms, and it is more affordable than other imported products available in the market as the program can be changed to produce different types of lung motion.

The innovators are further trying to commercialize the product, which can be used in place of the overseas model that is very much more expensive and does not give access to the control software.