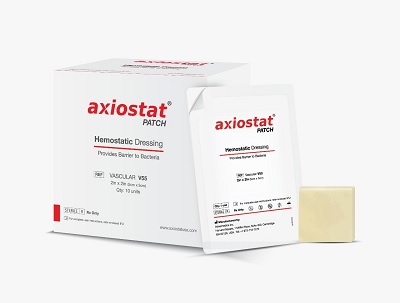 Axiostat Hemostatic Patch is based on a protonated bioadhesive technology that works by providing a strong mechanical barrier to the injury site. It controls bleeding from puncture sites within minutes of application, providing a barrier to bacteria protection while reducing the ambulation time in patients significantly.

Axiostat had also received CE mark in Europe earlier and is approved in over 40 countries worldwide. Over half a million units have been deployed since inception globally especially on battlefields to control bleeding from trauma injuries.

Commenting on the latest development, Leo Mavely, Founder and CEO, Axio Biosolutions said, “This is a major milestone for us as the FDA clearance opens the door for us to enter markets such as cardio-vascular, haemodialysis and military bleeding control in the US. Axiostat is already a market leader for these in many countries and we intend to bring this technology to the US customers soon.”