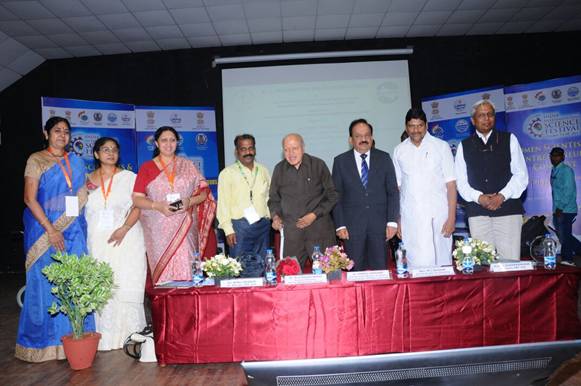 It was inaugurated during IISF, 2017 in Chennai in the presence of Prof. M. S. Swaminathan, Founder Chairman, Women Biotech Park,  and M C Sampath, State Minister of Industry, Government of Tamilnadu.

While delivering the Conclave Address Dr. Harshavardhan said that, “Globally there has been a special focus on addressing the issues related to Women in Science and framing policies which support the same. In India we have laid special emphasis on empowerment of women. Prime Minister Narendra Modi has stressed upon the need for special programmes which not only technically empower the women but also create employment opportunities.”

“In the field of Science and Technology and Entrepreneurship, Indian women have had a major presence over the last 100 years. The DST and DBT have special schemes to attract women scientists and to provide employment opportunities to the unemployed women scientists. Women Entrepreneurship is a very important activity that has been growing rapidly in last few years. “Start up India”and “Stand up India” announced by Hon’ble Prime Minister are initiatives which offer tremendous opportunities to the women entrepreneurs”, he added.

He also said, “Biotech Park is a good example of a Centre and State Government Partnership. The Minister expressed his confidence that with the support of the State Government it will drive many important initiatives under Start up India and Make in India. A large number of Innovation schemes of the S&T Ministry being operated by DST and DBT and initiatives taken by BIRAC have today created a vibrant innovation ecosystem.  More than 1000 Start ups and nearly 200 Women Entrepreneurs have been supported. The Atal Innovation Mission also aims to promote the innovation ecosystem.”

Dr. Harshvardhan also released a book – Genesis of Biotech Park – on this occasion.

Women Scientists Conclave with the theme “Women Scientist and Entrepreneurs – Game Changers Driving Science for New India” was held as a part of India International Science Congress, 2017 in Chennai.

The Conclave is being attended by over 350 Women Scientists, Researchers, Faculty and Entrepreneurs, theme of the Conclave was to motivate young women to pursue science and entrepreneurship and explore new opportunities.