Ministry of Ayush inks MoU with Department of Science and Technology 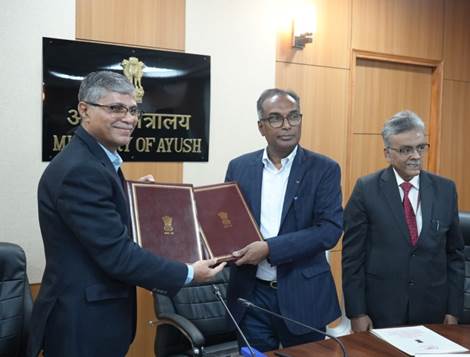 The MoU will identify the potential areas of research to explore cooperation, convergence, and synergy for evidence-based scientific intervention in the Ayush sector and further application of these into the public healthcare system.

Through the MoU, Ministry of Ayush and DST have agreed to jointly undertake R&D activities on scientific validation of Ayush concepts, procedures and products, create a platform for the exchange of information and bring about the application of modern science toward understanding the Ayush-related basic concepts and principles.

The Ministry of Ayush would identify thrust areas involving Ayush-related systems that require understanding the basic concepts, procedures, development of newer tools, and so on in modern sciences. Meanwhile, DST, through the Science and Engineering Research Board (SERB), would coordinate the implementation of thrust areas through well-chartered plans and mutual concerted actions.