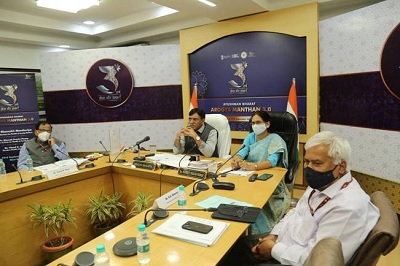 Union Minister for Health and Family Welfare Mansukh Mandaviya inaugurated and chaired the inaugural session of Aarogya Manthan 3.0 to mark the third anniversary of Ayushman Bharat – Pradhan Mantri Jan Aarogya Yojana (AB PM-JAY) scheme for its three years successful implementation across the country, in the presence of Dr Bharati Pravin Pawar, Union Minister of State for Health and Family Welfare.

The theme of the programme was ‘Service and Excellence’. Aarogya Manthan 3.0, a four-day hybrid (physical and virtual) event commenced by observing ‘Ayushman Bharat Diwas’.

Speaking on the occasion, Mandaviya said, “AB PM-JAY has reformed the entire healthcare system of India. It gives me great happiness that the scheme has served more than 2.2 crore people in the last three years to the people residing in the remotest of the areas. The journey of the last three years of implementation of the scheme has been tremendous as it has empowered millions of citizens of India with their Right to Health.”