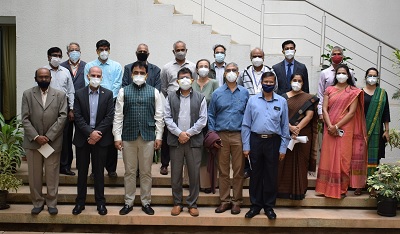 The Centre for Cellular and Molecular Platforms (C-CAMP), an initiative supported by Department of Biotechnology, Govt of India and Department of IT, BT, S&T Government of Karnataka, has signed a Memorandum of Understanding (MoU) with the Consulate General of the State of Israel to South India in Bengaluru to launch an Indo-Israel synergistic partnership in Science & Technology called Indo Israel Innovation Bridge.

The initiative will promote cross-talk and collaborative efforts in scientific research, encourage co-development of innovations and technologies towards commercialization and leverage each other’s entrepreneurial ecosystem to nurture and accelerate start-ups.

The Bridge that is a key effort in enhancing startup connectivity in the biotech sector between Israel and Karnataka, also looks to identify and link mutual R&aD efforts in both countries in Life Sciences domain.

Dr Ashwathnarayan CN, Deputy Chief Minister, Government of Karnataka said, "I congratulate C-CCAMP on the occasion of Indo Israel Innovation Bridge. Collaboration and integration is the way forward. From Karnataka State Government, I promise support and close collaboration from all departments such as education, health to see that technologies developed at C-CAMP are passed on to the people.”

Dr Jonathan Zadka, Consul General of Israel to South India, Bengaluru said “We are proud in establishing cooperation by building an Innovation Bridge between Israel and India, bringing closer together the startups ecosystems in life sciences of both countries. The potential of this initiative is enormous, and it has already generated tangible cooperation between startups from Israel and India. By doing so we will be consolidating existing islands of excellence spread across the two nations to create a collaborative environment for cutting-edge R&D. We look forward to supporting the Government of Karnataka to build this bridge of innovation. This new initiative will further strengthen the links between Israel and India.”