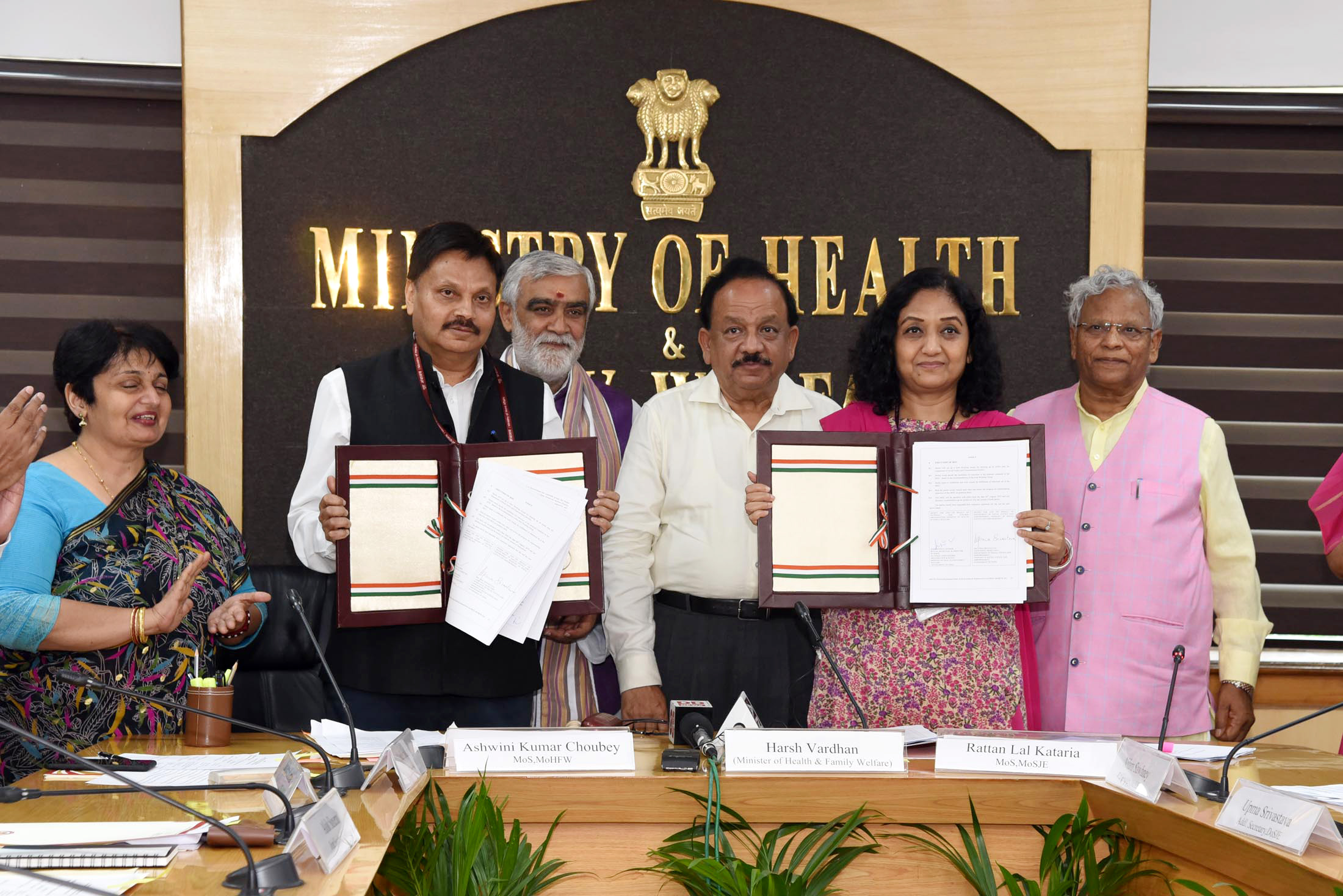 “As health is the responsibility of all Government departments, there is a need for a ‘sub-department of health’ in all the Ministries for health impact assessment of the policies/initiatives of these Ministries right from the conceptual stages.” This was stated by Dr Harsh Vardhan, Union Minister of Health and Family Welfare as he presided over the MoU signing ceremony between National AIDS Control Organisation (NACO), under Ministry of Health and Family Welfare, and Department of Social Justice and Empowerment (DoSJE) under Ministry of Social Justice & Empowerment (MoSJE).

Emphasizing on the need for innovations and newer ideas and thoughts for taking forward the fight against HIV/AIDS, Dr Harsh Vardhan stated that good quality knowledge and widespread awareness campaigns about the disease have immensely contributed to combatting it. Dr Harsh Vardhan said that this is the age of innovations and ideas and the kind of results we are expecting cannot be achieved through routine activities. “Some of the brightest ideas have come from the grassroots and it is therefore pertinent that we involve the grassroots people in all our strategy deliberations through regular brainstorming,” he stressed. He urged for synergies and alliances to be forged with various stakeholders in order to learn from their best practices.

Appreciating NACO for its notable achievements, Dr Harsh Vardhan stated that it is indeed commendable that NACO has worked with some of the most vulnerable people. It has played a very big role in significantly reducing the prevalence of HIV/AIDS in the country, and that too faster than the global rates.  He added that the impact of the programme has been significant with more than 80% decline in estimated new infections from peak of epidemic in 1995. “Similarly, estimated AIDS related death declined by 71% since its peak in 2005. As per UNAIDS 2018 report, the global average for decline in new infections and AIDS related deaths from peak has been 47% and 51% respectively,” Dr Harsh Vardhan mentioned. He further said that the Government is fully committed for meeting all the set goals to eliminate HIV/AIDS by 2030.

Dr Harsh Vardhan further said that this is one of the most important MoUs. It will help in developing specific strategies and action plans for HIV and AIDS prevention and mechanisms for drug addiction treatment and extending social protection schemes to the vulnerable populations. Speaking on the key deliverables of the MoU, he stated that the MoU will help in developing human resources and build capacity in order to strengthen the service delivery mechanisms for HIV & AIDS prevention, drug addiction treatment and referral to services offered by National AIDS Control Programme and DoSJE. The Union Health Minister further said that it aims at reducing incidence of social stigma and discrimination against victims of drug abuse and Children and People Living with HIV/AIDS. “It aims to promote enabling environment based on no stigma and discrimination,” Dr Harsh Vardhan added.

Ashwini Kumar Choubey, MoS (HFW) said that MOUs with other Ministries are low investment and high impact initiatives that help in leveraging each other’s strength. He emphasised on enhancing awareness of the target population.

Rattan Lal Kataria, MoS (DoSJE) said that the MoU will help in reaching out to the marginalised groups and will provide opportunity for empowerment and access to social protection schemes by the high risk population, persons engaged in begging, People Living with HIV/AIDS (PLHIV), and Children affected by HIV & AIDS (CABA). The Minister also appreciated MoHFW for its initiatives.

The MOU will catalyze in achieving the national goals and objectives of HIV prevention and impact mitigation. Through this MoU, the services of various institutes under DoSJE such as National Centre for Drug Abuse Prevention (NCDAP), National Institute of Social Defence (NISD), Integration Rehabilitation Centres for Addicts (IRCAs) will be leveraged for execution of activities laid out in the MoU.