Stresses on importance of awareness drives, community participation and cooperation of all stakeholders 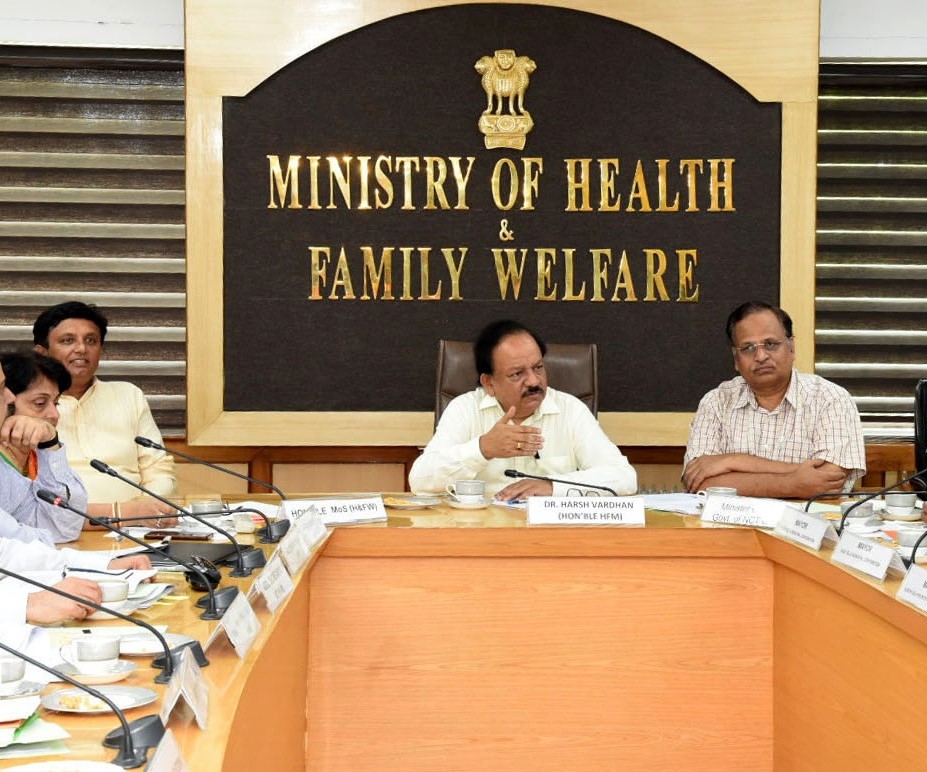 Dr. Harsh Vardhan, Union Minister of Health and Family Welfare held a high level meeting to review the preparedness for prevention and control of vector borne diseases (malaria, dengue, and chikungunya) in Delhi.

Taking stock of the situation, Dr. Harsh Vardhan was briefed on the current situation of malaria and dengue in Delhi and the action required from the State government, Municipal Corporations, state hospitals, school education department, DHR, Railways and the Containment Board etc. Stressing on the importance of widespread awareness on prevention and control of the vector borne diseases, the Union Health Minister urged all stakeholders to undertake awareness drives through active community participation and cooperation of all stakeholders such as RWAs, shopkeepers’ and traders’ associations.

He further stated that school children can play a very important role in creating awareness. They could become 'Swasthya Ambassadors' and appointed as champions for creating awareness and checking for mosquito breeding sites in their schools and neighbourhood. He further urged the state government and the Mayors to work towards making hospitals, schools and government buildings ‘Vector-Free’.

Dr. Harsh Vardhan suggested that Malaria should be made a notifiable disease. Satyendra Jain assured that the same would be done immediately. It was also suggested that all hospitals, including the private ones, should appoint a nodal person for vector borne diseases to ensure that the Government and private interventions and efforts to prevent/ cure vector borne diseases, are in tandem.

The Union Minister further said that to create awareness and visibility, it will be appropriate that a 2-day mass awareness drive be undertaken where the elected representatives, MPS, MLAs, Corporators, senior officials of MoHFW, state government, Municipal Corporation, NGOs, and other eminent people undertake visits in different part of Delhi and conduct a surveillance visit and check for breeding sites in their buildings (especially the roofs) and their vicinities.

“When all stakeholders will come out on a single day, it will send a very strong message and nudge the public and check for breeding sites at their work space and neighbourhood”, Dr. Harsh Vardhan stated.

As regards preparation to manage the cases, the representatives from the Central government hospitals informed that there was no shortage of beds, drugs, testing facilities etc., to treat the incoming patients; the Union Health Ministry has already provided all logistical and technical support to the Delhi Government in terms of surveillance and diagnostic kits to strengthen their preparations. Also, protocol for training of doctors and paramedics has been shared with the Delhi government. However, it was highlighted that people need to be informed that they should focus on the symptomatic treatment and consume lots of liquids and take rest and not rush for getting admitted in hospitals, unless required.

Dr. Harsh Vardhan further stated that the focus should be on active case finding of cases and reduction of vectors. He said adequate attention should be given to building sturdy surveillance systems. Effective surveillance and monitoring was key to success in combating these diseases, he emphasized.

He also stressed on strengthening the data collection mechanisms to ensure that high quality data is captured.

Satyendra Jain assured that the highest priority is being given to prevention and control of dengue,malaria and chikungunya in Delhi, and all efforts are being made in this direction.