The MoU was signed by Vaidya Rajesh Kotecha, Secretary, Ministry of AYUSH and Dr. Shekhar C. Mande, Director General, CSIR and Secretary, DSIR in the presence of senior officials from both the organizations 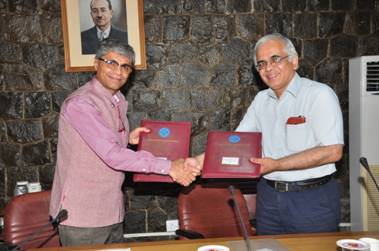 A Memorandum of Understanding (MOU) has been signed between the Ministry of AYUSH and Council of Scientific and Industrial Research (CSIR), New Delhi for cooperation in research and education in areas of traditional systems of medicine and its integration with modern science.

The MoU was signed by Vaidya Rajesh Kotecha, Secretary, Ministry of AYUSH and Dr. Shekhar C. Mande, Director General, CSIR and Secretary, DSIR in the presence of senior officials from both the organizations.

Speaking on the occasion, Secretary stated in due cognition of the growing interest of traditional medicines worldwide, there is a need of multipronged and innovative approaches for the acceptance of this science. He said that the combination of traditional healthcare and modern basic science has a huge possibility to do innovative and path-breaking researches which can be used for the explanation of various basic concepts.

DG, CSIR appreciated the ongoing projects and programmes between the two organizations. He stated that enhancing the collaboration through joint R&D efforts ranging from fundamental science to validation and thereafter product development, will significantly help in the growth of the Indian contributions to this important sector, not only nationally but internationally as well. Futuristic efforts of this inter-ministerial cooperation shall include pursuit of Data mining & analytics and Artificial Intelligence to enable and facilitate concepts such as “Traditional knowledge inspired drug discovery and development” and “Food as Medicine”.

Previously, CSIR jointly with Department of AYUSH (now Ministry) developed the Traditional Knowledge Digital Library (TKDL), a globally recognized proprietary database on Indian systems of medicine for preventing bio-piracy and misappropriation of our traditional knowledge. The constituent laboratories of CSIR and councils of the Ministry of AYUSH have also supported each other in the development of improved varieties and captive cultivation of the medicinal plants including rare, engendered and threatened (RET) species, Botanical Reference Standards and Pharmacopoeial standards, and Ayurgenomics, among many others.

In due cognition of the upward surge in the usage of herbal medicines and supplements globally, the endeavor of Ministry of AYUSH and CSIR today is to bring the organizations under an umbrella understanding for pursuing focused R&D efforts in the domain.