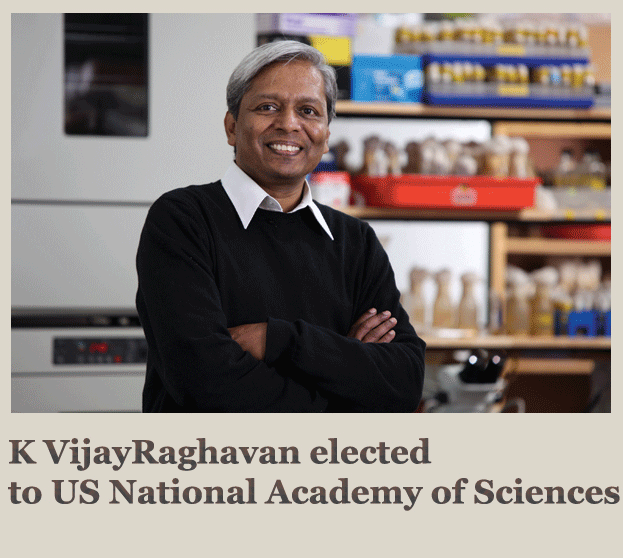 Dr K VijayRaghavan is one of 21 foreign associates elected this year. He was recently elected a Fellow of the Royal Society (London). Dr Raghavan, a distinguished professor at the National Centre for Biological Sciences (NCBS) and also the current secretary of the department of biotechnology (DBT), government of India, has been elected a foreign associate of the US National Academy of Sciences.

Members are elected to the National Academy of Sciences in recognition of their distinguished and continuing achievements in original research. Membership is a widely accepted mark of excellence in science and is considered one of the highest honors that a scientist can receive. VijayRaghavan is one of 21 new foreign associates elected this year. He was recently elected a Fellow of the Royal Society (London) and is also the recipient of several prestigious awards such as the Shanti Swarup Bhatnagar Award, JC Bose Fellowship and the Infosys Science Prize in Life Sciences.

As per a press release issued by the NCBS, Dr VijayRaghavan mentioned,"Thanks all. All the Kudos go to the terrific students, research fellows, postdocs and collaborators here and all over the world who have done wonderful work in a wonderful environment. And, we all should not forget to thank all those who manage this environment every day, making sure we all can do our science unfettered. Shuttling between Delhi and Bangalore, I appreciate this all the more. Congrats to all of you then and lots more to do and lots more fun to be had doing science."

"Vijay's election to the US National Academy of Sciences is a proud moment for all of us," says Satyajit Mayor, director, NCBS. "Vijay has been recognized for his contributions to the study of the development of the neuro-muscular system involved in locomotion in the fruit fly. His work has had tremendous international impact, and this is indeed something we all need to be proud of. Vijay's impact has also been felt on his immediate environment. As one of the founding pillars of NCBS, his approach whilst director has been to nurture an institution as an organism that needs gentle but instructive cues. Before he left for the Department of Biotechnology where he is the current Secretary, he set up inSTEM, an institute that is devoted to understanding the unfolding of developmental programmes in stem cells from a basic biology and translational perspective. At the DBT I am sure he will try and use his creative instincts to do even more. All of us at NCBS and inSTEM congratulate Vijay for this most recent accolade, and are sure he will continue to accrue many more."

VijayRaghavan's initial training was in Chemical Engineering from the Indian Institute of Technology at Kanpur. He then decided to pursue a career in Life Sciences research and carried out his graduate studies on a genetic analysis of flight muscle at the Tata Institute of Fundamental research in Mumbai. As a post -doctoral fellow and Senior Research Fellow of the California Institute of Technology, he studied the genetics of hormone-regulated genes in Drosophila. He then returned to India to set up a laboratory for Drosophila developmental genetics and with Obaid Siddiqi and colleagues, worked to establish and develop NCBS, which is now one of the leading laboratories for research in biology in India.

VijayRaghavan has made an international mark in developmental biology of flies, institutions, and science in general. In each of these contexts his work has been on the brain-muscle interface and how cells and individuals make decisions that lead to them merging their identities to achieve effective system function.