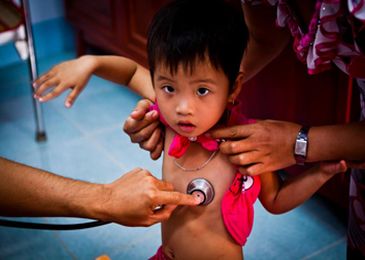 Timely intervention: Implementation of GAPPD report would help in bringing down disease incidences!

"Children who are poor, hungry and living in remote areas are most likely to be visited by these "forgotten killers" and the burden placed by pneumonia and diarrhoea on families and health systems aggravates existing inequalities", rightly mentions the GAPPD report developed by the World Health Organization (WHO) and United Nations International Children's Emergency Fund (UNICEF). The report surely holds importance for India, where diarrhea accounts for about 12 percent and pneumonia accounts for 23 percent of deaths in children less than five years old.

The GAPPD represents the first-ever simultaneous effort to protect children from pneumonia and diarrhea, which take the lives of almost two million children a year. The report is based on the most recent data and evidence collected in a special series published in The Lancet on April 12, 2013.

It provides the most up-to-date strategies and evidence needed to significantly reduce childhood deaths and illness. The GAPPD will provide a framework to protect children, prevent disease, and treat children who become sick using proven interventions that have contributed to major reduction in child deaths.

The optimism can be well observed from the targets set by the GAPPD. As the report puts it, "The goal is ambitious but achievable: to end preventable childhood deaths due to pneumonia and diarrhoea by 2025."

To achieve these goals, the targets will need to be maintained or reached by the end of 2025 include 90 percent full-dose coverage of each relevant vaccine (with 80 percent coverage in every district); 90 percent access to appropriate pneumonia and diarrhoea case management (with 80% coverage in every district); at least 50 percent coverage of exclusive breastfeeding during the first six months of life and virtual elimination of paediatric HIV.

The GAPPD calls on national governments to prioritize the fight against pneumonia and diarrhea and is designed to inform country policies and practices. The report makes recommendations to the governments on interventions that will help reduce child deaths due to these diseases.

Nongovernmental organizations and civil society organizations working around the globe to save children's lives and improve health, have welcomed GAPPD. Many have committed to helping implement this new, integrated approach and to begin working immediately with national governments, donors, multilateral institutions, the private sector, and other partners to make the global framework a reality in the countries and communities hardest hit.

On this initiative, Dr Naveen Thacker standing committee member of the International Pediatric Association and President Elect of the Asia Pacific Pediatric Association said, "We know what happens when the world comes together to take on killer diseases. We've eliminated the threat of small pox and we are drawing close to eradicating polio. Pneumonia and diarrhea could be next, if we come together again to take action now by prioritizing and implementing the integrated approach laid out in the GAPPD."

Dr Madhumita Dobe, director and professor of Public Health, head of the Department of Health Education, All India Institute of Hygiene and Public Health, Kolkata, and chairperson for the Indian Academy of Public Health (IAPH), pointed out that in India access to clean water, sanitation, and hygiene (WASH) remains a persistent problem. She said, "Diarrheal disease is largely preventable and improving access to WASH can play a huge role in preventing the condition, alongside treatment with oral rehydration solution and safe and healthy feeding processes."

While endorsing this endeavour towards the GAPPD, Dr Dobe also added that IAPH and the Indian Public Health Association (IPHA) would definitely undertake every effort to disseminate the information through all their activities and communication opportunities to their members as well as national and international partners and collaborators. Importantly, she emphasized that this could also be one of the major theme areas for deliberation during the forthcoming World Public Health Congress in 2015 that the IPHA will be hosting in Kolkata.

Dr Dipika Sur, secretary general for the IPHA Kolkata points out that diarrheal disease also plays a significant role in persistent problems of malnutrition which in turn, can lead to stunted growth and impairment to future cognitive development, conditions which will have a detrimental impact on any child's chances of succeeding in education, becoming fully economically active, or raising a healthy and productive family of their own.