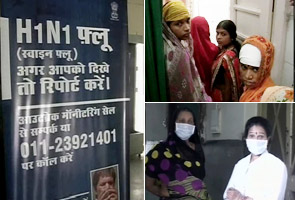 Out of total 4746 Influenza A H1N1 laboratory confirmed cases as on May 03, 2013, close to 576 deaths have been reported so far. Topping the H1N1 causality list so far, the state of Gujarat recorded has witnessed the second highest number of. confirmed cases upto 1020 after Delhi. Out of that, 194 death cases recorded by the state put it one the top of the list.

Delhi witnessed the highest confirmed cases of 1499. However the deaths were interestingly only 16, leading one to believe that the state has improved the health infrastructure. In Rajasthan, the death cases stood at 836 and out of that 151 were reported as death cases.

The other states such as Andhra Pradesh and West Bengal recorded low death rate four and three deaths being reported respectively. The union territory of Chandigarh saw five deaths out of 37 cases that were registered. Tamil Nadu, Uttarakhand, and Uttar Pradesh witnessed three, two and seven death cases respectively.

As per the union health ministry statement issued in February, 2013, "World Health Organization while declaring the pandemic to be over in August 2010, conveyed that the influenza H1N1 pandemic virus would take on the behaviour of seasonal influenza virus and continue to circulate for some years to come. Hence, in the post-pandemic period, localized outbreaks of varying magnitude with significant level of H1N1 transmission are expected."

"In the post pandemic period, our country had experienced outbreaks during the period August to October, 2010; May to July 2011; March and October 2012 and now in January -February 2013. Increase in number of cases of Influenza A H1N1 are being reported presently from the States of Delhi, Gujarat, Haryana, Rajasthan and Punjab. Small pockets of population who remained unexposed to the pandemic and susceptible would be affected'" it had added further.