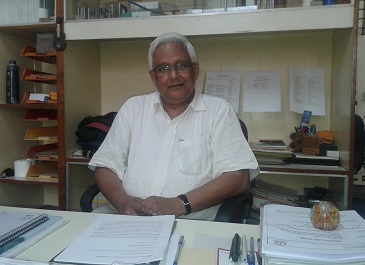 He spoke with us about his passion for research, Nobel Prize, awards, and research scenario across the country. Edited Excerpts:

Please tell us about your research work. What do you want to achieve with your research?
Prof. Chatterji: I work on bacterial gene expression since several decades now. I worked with CCMB before joining IISc, where I was working on E.coli under stress and after coming to Bangalore in 1999, I shifted to Mycobacterium smegmatis because it is a very good model system.

My whole emphasis is how the regulation of gene expression takes place, how many proteins are expressed, how the protein functions within a system and interact with enzyme like RNA polymerase and how they influence the expression pattern. In the process, we identified few small molecules which are known as second messengers, these help in signal transduction for bacterial communication, stress response and these are cyclic AMP, Cyclic di-GMP etc.

AMPs and ppGpp bind RNA polymerase and modulate its activities. In fact we were the first to show that ppGpp binds RNA polymerase in 1995, nobody believed it then but now everybody accepts it.

Cyclic di-GMP, on the other hand, does not bind RNA polymerase, at least no evidence yet but there are lots of effector molecule which finally bind them and modulate gene expression.

Under difficult situations like lack of oxygen, food etc how bacteria survive? This survival at stringent condition is good for them but not for us, therefore, we should know as how to prevent them from doing so that they die. Under stressful condition they are very infectious. Knowing the details of these pathways will ultimately lead us to manipulate them in such a way that they do not survive even under stressful situations.

I have also identified proteins that get expressed under starvation conditions and bind to DNA very tightly so that the all important genetic material does not get damaged by free radicals.

How many processes or mechanism you have identified so far?
Prof. Chatterji: We have worked on stringent response and quorum sensing in mycobacteria. We have found two enzymes, the regulation and published several papers. We wanted to develop inhibitors of ppGpp by way of mimicking the structure.

Such inhibitor is available in the literature, but it works at high concentration and we are trying to modify it. We have done some interesting work like cell membrane mimicks which can stop the GPL synthesis. We have some leads that tell us that Vitamin C may act as an inhibitor for stringent response.

What could be the real world applications of the research (your work) in molecular biology?
Prof. Chatterji: I would like to say that knowing this mechanism will lead us to some inhibitors which will interfere with the maintenance of the stationary phase, or dormant bacteria under the stressful conditions. These bacteria are also called dormant, and take part in biofilms production. My current work is to look at biofilms inhibitors.

How the research in molecular biology have evolved over the years in India?
Prof. Chatterji: Oh, now India is doing well. Globally, it is not very competitive, yet there are certain sectors that have performed well. But let me put it very categorically, that we have performed extraordinary well considering the kind of inputs we have financially.

Did you always want to become a scientist? What drew you to this field?
Prof. Chatterji: Until my MSc, I was really not motivated enough for science. For my PhD, I came to IISc and that is when the whole world of science opened up for me. This institute gave me the first exposure of international science.
The mentors, ambience, good friends, play all important role in shaping your career. This Institute provided me the best of these and inspired me to pursue science as a career. I knew nothing about many things but I could listen to the talks of big and great people.This drove me to think that I should take up this profession and what could be a better career than where you are getting paid for your hobby.

What is your favorite aspect of your research?
Prof. Chatterji: One is stringent response or stress response in which I showed that ppGpp binds to RNA polymerase and regulates gene expression.
Recently, we did some work on a RNA polymerase subunit called omega and function of omega subunit. Nobody gives much importance to this subunit because people think that it is redundant subunit and has no biological function. We showed how important it is.

Would you share with us a turning point or defining moment in your work as a scientist?
Prof. Chatterji: I would say my research work on stringent response where I showed that ppGpp binds to RNA polymerase and regulate gene expression, really gave me some international recognition.

You have received many prestigious awards like IISc Alumni Award for Excellence in Research, UGC-J C Bose Award and the latest Padma Shri award. Does the awards give more validity to research? Are they helpful in anyways? Does this make it easier for you to secure grants, etc.?
Prof. Chatterji: It does definitely, but it is not the only thing. The most important thing is peer recognition, and what your fellow scientists think of you. Award, recognition at International level is very good.

Padma Shri is also very good, in a way your country tells you that you are an important Indian, It makes me very humble.

We do see a lot of NRIs getting prestigious awards like Nobel Prize. However, we are yet to see Indians working here bagging the prize. Your comments.
Prof. Chatterji: I think we are far away. China wanted it for so long and they spend so much money on the research and they got it last year. We do not spend enough money on research. I personally believe Nobel Prize is directly proportional to the amount of money spent on research and international network. Instead of this question we should ask first, how many of us get call for plenary talks in major international meeting?
We are far way in biology, but eventually we will get it. We are close in Physics, we have done some really great and path breaking work, I think this is the only field in India, in my opinion, which is close to getting Nobel Prize.

What are your thoughts on the quality of research stemming from India? Are there enough opportunities for researchers?
Prof. Chatterji: We are not very good yet. The quality is not that great. Of course there are certain places which are doing some great work. But overall it is abysmal. The reason being of course, not enough amount of funding.