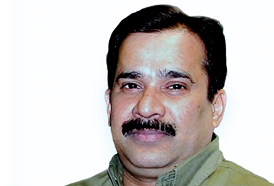 Dr Amulya Kumar Panda cherishes his 20 years of research experience in the area of bioprocess engineering. He has been deeply involved in research concerning the applications of chemical engineering processes to biological processes for production, purification and formulation of proteins and biomolecules.

Currently working as a senior scientist at the product development cell, National Institute of Immunology (NII), Dr Panda is spearheading research efforts into various application aspects of biomolecules. The other areas that he focuses are refolding and high throughput purification of bioactive protein from inclusion bodies of E coli. He is also looking at formulations and delivery of therapeutic proteins, DNA and vaccines using polymeric particles.

After completing his MTech in chemical engineering from the Indian Institute of Technology, Chennai in 1985, Dr Panda went on to pursue doctorate in biochemical engineering and biotechnology from the Indian Institute of Technology, Delhi in 1991. Later, he continued his research at NII, while also being a visiting scientist at the Department of Chemical Engineering, University of California at Berkeley, CA, USA in 1994. He was also a part of the research project at the Laboratory of Nanobiology, College of Pharmacy, Nebraska Medical Center, USA in 2004.

Apart from publishing 50 research papers and 8 chapters, Dr Panda holds 10 patents in his area of expertize. Among the numerous awards conferred on him, the major ones include the Young Asian Biotechnologist Prize by the Society for Biotechnology, Japan for the year 2004; Excellence in Scientific Achievements, 2001 from NII; and Biotech Product and Process Development and Commercialization Award, 2001 by the Department of Biotechnology. Dr Panda has also been associated with various committees and panels. He is also the editorial board member of International Journal of BioSciences and Technology.

Dr Panda and his team have been working hard to develop a cheap alternative for wound management. His creation, the biodegradable polymer particles encapsulated with drugs along with antibiotic and growth factors, can be self-assembled into bio-membranes in a single-step at room temperature, and can be used immediately as artificial skin substitutes for burns and wound treatments. For his efforts, Dr Panda and his team won the India Innovation Pioneers Challenge (IIPC-2008) award, organized by the Department of Science and Technology, in association with Intel India and Indo-US Science and Technology Forum in August 2008.

On choosing this subject, Dr Panda said, "We discovered the process of membrane formation using polymeric nanoparticles on which we were working for a long time for vaccine delivery. Because of the multidisciplinary structure of my research group, we were able to change the focus of our research to utilize the membrane for wound healing."
"India needs two type of technological innovations: one is 'nice to have it' and the other is 'need to have it'. Our innovation belongs to the later category," concludes Dr Panda.