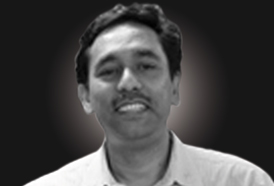 The genome of living organisms continues to offer numerous challenges in form of hidden clues for many unknown functions in the deoxyribo nucleic acid i.e. DNA sequences. Having questioned the functional relevance of a certain type of DNA secondary structure, his research results have revealed that these structures may have a role to play in controlling the gene regulation. These key findings may lead to the unveiling of potential drug targets and the development of drugs for many dreadful diseases in future.

Enriched with his experience spanning 15 years in the areas of chemistry, biochemistry and functional genomics, Dr Chowdhury is currently working as a scientist at the CSIR - Institute of Genomics and Integrative Biology (CSIR-IGIB). His research at CSIR-IGIB is focused on the role of G-quadruplex or G4 DNA in gene regulation in prokaryotes and eukaryotes, using functional and comparative genomics approaches. This led to a startling finding-regulatory regions in human, chimpanzee, mouse, rat and also in many bacteria, which are not only rich in putative G-quadruplex forming sequences, but these motifs also influence gene regulatory mechanisms. For his key findings, Dr Chowdhury has been shortlisted among the eleven other scientists for the prestigious Shanti Swarup Bhatnagar prize 2012.

Dr Chowdhury obtained his Masters' degree in chemistry at Jadavpur University, Kolkata and doctorate from Indian Institute of Chemical Technology, Hyderabad in 1998. Later, he joined as a postdoctoral fellow at the department of biochemistry, University of Nebraska, USA and at the Max-Planck-Institut fÃ¼r Terrestrische Mikrobiologie, Marburg. Following his return in 2011, he worked at Insilico Sciences, Bangalore for about an year. This short stint helped him experience the corporate ambience and work with IT professionals. In 2002, he joined CSIR-IGIB as a faculty member. Dr Chowdhury feels indebted to the ex-director of CSIR-IGIB, Dr Samir K Brahmachari (currently DG-CSIR), who gave him an opportunity to carry out research in genomics despite coming from a different background.

Dr Chowdhury has received a number of awards and fellowships including the Swarnajayanti Fellowship (2007), Department of Science and Technology, DBT National Bioscience award for career development (2010), Wellcome Trust-DBT Senior research fellowship (2011), and CDRI award for excellence in drug research in life sciences (2011).

Using G-quadruplex (G4 DNA) as a model, Dr Chowdhury and his team revealed the interesting role of the quadruplex motif in gene expression. It was not clear how such a mechanism could function without participation of regulatory factor(s) that might engage G4 motifs for gene transcription. According to Dr Chowdhury it was surprising to find that such structures were predominant in the DNA stretches where the controlling lock and key mechanisms are present.

Dr Chowdhury feels that although there is no dearth of young researchers in India, we still need to build more inter-disciplinary academic and industry ecosystems to harness the available talent pools more efficiently. He says that, "Young people need encouragement and self-confidence, so that they are motivated to work for the nation."