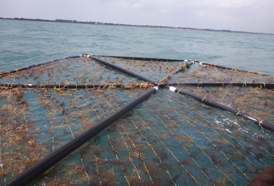 Mr Shrikumar Suryanarayan, chairman, Sea6 Energy had earlier decided to pursue his personal interests in public health, bioenergy and education and taught at his alma matter, IIT Madras in the year 2007. Mr Suryanarayan was then intensely looking out to solve the next problem in the application of biotechnology, when some students at the institute reached out to him. They requested him to help them with their project on "Stress Kit" to enter the the iGEM 2008 competition of the Massachusetts Institute of Technology (MIT) in the US. They were selected for the final round and had to go to MIT for making the presentation. But they couldn't go to the US as they were denied a visa. Yet they won a prize after making a video presentation from India. It was because of their passion, sheer persistence, enthusiasm, and dynamism that they won the iGEM 2008 competition. "They were brilliant and passionate and I wanted to some how tap their potential. That is how we all came together," remarks Mr Suryanarayan.

Mr Suryanarayan strongly believes that we will always be short of land and we have to think for solutions that would not get caught on the food versus the fuel debate. "We need to capture energy from the sea." Mr Suryanarayan got them interested in the area of algal biofuels. They attended several algal biofuel conferences and spent the last two years of their MTech investigating the potential of algae biofuel. "The group spent more than 18 months working on the engineering framework of microalgae," explains Mr Suryanarayan. They were almost about to abandon the project, as they realized that they were going after an unmanageable idea. The challenge was that algae needs significant amounts of fresh water, large nutrient inputs and plenty of land and it would take several years to crack the code to make it economically viable.

The birth of Sea6 Energy

When they had finished their master's degree and were beginning to disperse, somebody from the group thought of seaweed (macroalgae) as an alternative. The seaweed, according to Mr Suryanarayan, has inherent advantages and appears to be an attractive proposition as biofuel feedstock, as the seaweed grows in shallow ocean waters and doesn't need land, water or nutrients since the ocean itself provides them. There were about three labs working on macroalgal biofuel at that time-Bio Architecture Labs the Korean Institute of Industrial Technology and the Philippines government. Mr Suryanarayan was able to convince several members of his prized iGEM 2008 team (Mr Nelson Vadassery, Mr Sayash Kumar, and Ms Sowmya Balendiran) to stay back to start Sea6 Energy and focus on macro algae route to biofuels. Thus Sea6 Energy was incubated in July 2010 at IIT Madras campus. Mr Suryanarayan and a few IIT Madras alumni contributed about Rs1 crore to get the company started.

Ever since the day Sea6 Energy was formed, the team has achieved several milestones. Starting with the scientific possibility of growing plants on sea and finding the right plants, the stage is now set for technical feasibility. It has also developed technology to allow farmers to grow seaweed in deep waters. They have built a 4,000 sqft farm to grow seaweed and convert seaweed to ethanol. The process for this has been identified. The company's next phase is to move from technical feasibility to commercial viability. It has identified the key enzymes. It plans to build 1sqkm of ocean farm and demonstrate that biofuel can be commercially produced. It plans to achieve this around 2015-2016. It has also entered into a tie up with Novozymes to explore enzymatic technology to produce fuel ethanol, fine chemicals, and protein from seaweed. Novozymes will research, develop, and manufacture enzymes for the conversion process, while Sea6 Energy will contribute its offshore seaweed cultivation technology. It recently raised over Rs3 crore to develop this technology.