Antimicrobial Peptides: The future weapon in fight against antibiotic resistance

Every year AMR takes nearly 7 million lives and is predicted to rise to a whopping 10 million by 2050, if left unchecked 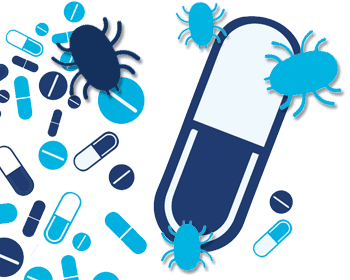 The unprecedented mayhem created by SARS-CoV2 has made the world realize the enormity of damage an infectious agent can bring upon public health in the absence of any approved treatment. With approximately 6.3 million affected , accompanied with a crippling economy and the ‘new-normal’ living conditions, the world is learning a lesson in the hardest possible way.

The ongoing global situation has forced WHO and other health-care organizations to turn their attention towards another, but much graver and an ever-growing threat that has been lurking in the shadows of COVID-19 pandemic and other viral epidemics – the antimicrobial resistance (AMR) or in more colloquial terms, ‘antibiotic resistance’.

Every year AMR takes nearly 7 million lives and is predicted to rise to a whopping 10 million by 2050, if left unchecked. The breeding ground for such multi-drug resistant pathogens or ‘superbugs’ are largely hospitals (i.e. nosocomial origin), where patients undergoing treatment in intensive care unit are more vulnerable as they are either immunocompromised or require specialized medical assistance/devices to survive.

This illustrates the additional threat that COVID-19 patients have to fight alongside the virus, further complicating their recovery process. Recent studies in The Lancet affirm that 50% of COVID-19 positive patients die of bacterial pneumonia, while 59% suffer from septicemia.

Such scenario was also replicated during H1N1 flu epidemic, where 55% of infected people died of bacterial pneumonia. Thus, secondary bacterial infections indeed seem like an old friend to the virus.

Currently, hospital authorities are thwarting antibiotic stewardship practices and prescribing antibiotics like azithromycin, amoxicillin, tetracycline, doxycycline and teicoplanin as a precautionary measure to COVID-19 patients who are critically-ill or are being kept under ventilation support. Such imprudent or excessive usage of last-resort drugs is quite worrisome as this can just be enough in brewing another pandemic, perhaps at a much larger scale.

So, probably the question we must ask ourselves now is how well-prepared  are we to deal with such future outbreak?

Dr. Julie Gerberding, ex-director of CDC aptly highlights the current status –‘the gap between the superbug threats we face and the antibiotics we have to combat them is rapidly growing wider.’ It is fueled by the low market returns, limited drug usage and strict regulatory guidelines, which has kindled big pharma companies to retreat and made other small pharma companies go bankrupt. The existing antibiotic pipeline ( 41 in total, with 4 FDA approved, 1 under new drug application, 13 in phase 3 trials and rest in Phase 1 or 2) hardly provides any hope to already tattered antibiotic market.

Majority of these clinical drug candidates are revamped versions of old antibiotic classes and are only marginally effective against ‘priority-list’ ESKAPE pathogens with a high likelihood of acquiring resistance. This clamors for the urgent need of innovative solutions or the development of a new chemical class to treat the resistant pathogens and limit their resistance dissemination.

Such ‘outside-the-box’ treatment options are enlisted by The Pew Charitable Trusts, that majorly constitute vaccines and antibodies but are deemed ineffective against the priority pathogens. This enticed me to emphasize on a novel option that is gaining fame slowly for its enormous potential to either complement or work in synergy with the available antibiotic arsenal- Antimicrobial Peptides (AMPs)

Antimicrobial peptides (AMPs) are small protein fragments of 10-50 amino acids in length that demonstrate high potency against a myriad range of pathogens like bacteria, fungi, viruses and protozoans. They are produced by diverse life forms ranging from prokaryotes to humans and act as immune-system modulators that protect the host from infections and promote pathogenic clearance.

They are rich in positively-charged amino acid residues and hence, have high-affinity towards negatively-charged bacterial membrane. They display fast killing kinetics through their multi-targeted mechanism - forming huge pores on the membrane leading to leakage of cytoplasmic material, binding to intracellular targets like DNA/RNA and inhibiting other metabolic processes like protein synthesis, protein folding, and/or cell-wall synthesis.

Why are they unique?

Their rapid killing and multi-hit mode of action makes them refractory to resistance evolution than conventional antibiotics. The extent to which a bacterial species must repurpose its lipid bilayer composition to attain resistance against such agents is simply unattainable.

Where do they stand now?

Despite having such attractive attributes, it has been a formidable challenge to bring an antimicrobial peptide in the market. Currently, within the potential pool of clinical AMPs, majority are restricted to topical usage due to acute cytotoxicity, protease-sensitivity, fast renal clearance and low bioavailability, while, the remaining ones are being developed as immunomodulators to treat sepsis.

However, the present pipeline seems incompetent in addressing the life-threatening infections (pneumonia, blood-stream infections, wound or surgical site infections and meningitis) caused by recalcitrant class of Gram-negative bacteria like Acinetobacter, Klebsiella, Pseudomonas, etc. that occupies the top three tiers of WHO critical list.

So, it’s imperative to shed limelight on three such small, budding pharma companies, who through their herculean efforts and clever tactics have developed potent and stable AMPs to outsmart these superbugs in successfully treating systemic infections.

Besides these rising stars, another US-based clinical stage biotechnology company, Peptilogics is worth-mentioning for their use of their proprietary computational design platform in designing peptides with novel mode of action against the high-priority ESKAPE pathogens. Their lead candidate, PLG0206 has been recently granted the status of priority review and fast-track designation by US FDA. Therefore, with all the low hanging fruits of antibiotic development been plucked and with the antibiotic market being jinxed, AMPs seems to be best bet in reinvigorating the clinical pipeline. Their immunomodulatory role and their ability to reverse the resistance evolution if, used in temporal cycling manner with antibiotics, markets them as the ‘future drug’.

Despite the astounding efforts by big funding accelerators like CARB-X, GARDP, etc.in backing the R&D of such innovative drugs through preclinical to clinical phases, there is a huge void in incentive programmes to lure pharmaceutical giants to invest in large-scale development and commercialisation of these products.

Given the world’s current struggle in dealing with COVID-19 virus, one cannot help but, recall these famous words by Benjamin Franklin – ‘By failing to prepare, you are preparing to fail’.

So, the time is now to shed the skepticism towards these innovative tools and rather, build a strong repository with more such ingenious therapeutic alternatives to win the battle. Better antibiotic stewardship practices, improved public health policies and refined business model strategies are the determinants in this fight, and could only be realized by a concerted global effort.