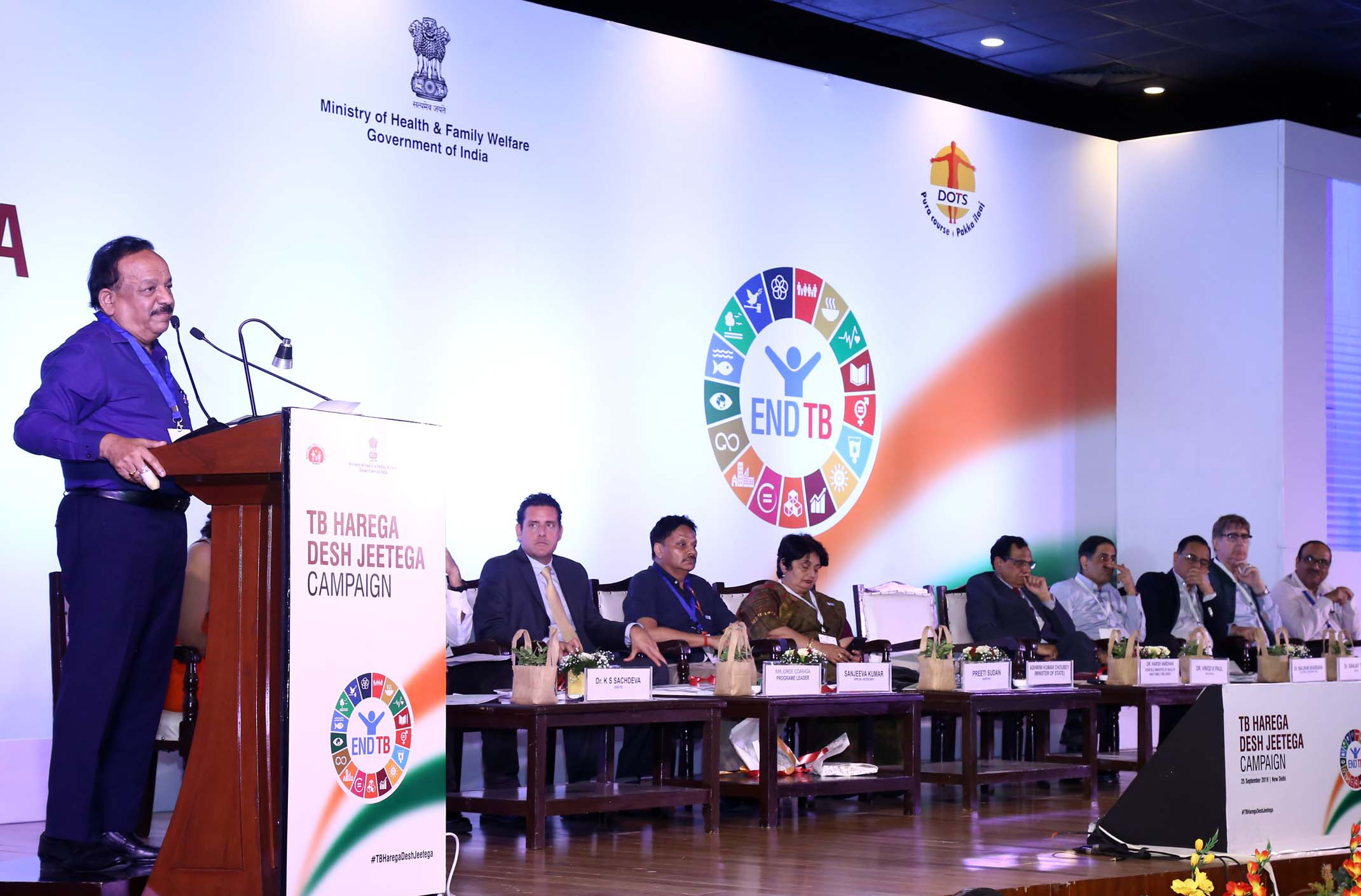 Dr. Harsh Vardhan, Union Minister for Health and Family Welfare has launched the new TB Harega Desh Jeetega Campaign, along with the National TB Prevalence Survey. Multi-stakeholder and community participation shall form the pivot of the countrywide campaign. “As part of our commitment to end-TB, we have established patient forums in over 95 per cent of all districts in the first 100 days, which clearly shows our strong commitment to ending TB in the shortest time. These district forums will bring the voices of the affected to the fore, and highlight on-ground challenges faced by patients and their families in accessing TB care services”, he stated.

The Union Health Minister also flagged off a van for the National TB Prevalence Survey. In all, 25 such vans will be part of the prevalence survey, which shall take 6 months and be carried out across the country. This shall present national and state level data, which will be used as a policy tool for further interventions.

In addition to these, as an important step, the Union Health Minister also launched an all oral regimen kit for multi-drug resistant TB patients which does not include injections which are painful and can have side effects. He also announced a partnership with the World Bank which is providing a $400 million credit for accelerating TB response in 9 states through private sector engagement and other critical interventions. Ashwini Kumar Choubey, Minister of State (HFW) was also present at the launch of the campaign.

Highlighting some of the key features of the new TB control campaign, Dr Harsh Vardhan stated its three strong pillars include clinical approach, public health component and active community participation. Other supporting elements of the campaign comprise private sector engagement, patient support, and political and administrative commitment at all levels. He added that the Government is committed to ensuring all patients, irrespective of where they seek care (private sector included), receive free-of-cost, high quality TB care. “In line with the Honourable Prime Minister’s vision, we have introduced pivotal initiatives that are changing the way we diagnose, treat and prevent TB, and are on track to achieving our target of a TB-free India by 2025, much ahead of the global target of 2030,” he said.

Dr Harsh Vardhan said that we have now more than 300 TB Champions in the TB program. He applauded the courage of Chinmayi from Odisha who narrated her story of fighting brain TB, and how she turned into a strong advocate and supporter for efforts for TB control. “TB survivors like Chinmayi and many others who have shown exemplary courage to follow the course of treatment, should be given the opportunity to lead the way”, Dr Harsh Vardhan said. The Union Health Minister further added that India’s campaign to eradicate polio could be successful because of the thousands of volunteers who contributed to the cause. “Who were these people? These were people from all walks of life - doctors, leaders, health workers, community members, faith-healers - and with their sustained and dedicated effort, India managed to eradicate polio. What we did with Polio then, we need to do with TB now,” he stressed.

Dr Harsh Vardhan also awarded states for their excellent performance in tackling TB. Among states with a large population (>50 lakhs), Himachal Pradesh and Gujarat were awarded as best performers, while Tripura and Sikkim were recognized for their efforts among medium population (less than 50 lakhs) states. Puducherry, and Daman and Diu were judged as the best performers among Union Territories.

The new TB campaign aims to improve and expand the reach of TB care services across the country, by 2022. This includes preventive and promotive approaches, and proposes potentially transformative interventions such as engagement with private sector health care providers, inter-ministerial partnerships, corporate sector engagement, latent TB infection management, and community engagement. The interventions will be accompanied by a comprehensive, mass media and communications campaign to generate awareness about the disease and the free treatment services available under the government program. The media campaign was also launched by the Health Minister today.

In the past few years, there have been several important policy initiatives, resulting in an increase in the number of cases reported to the government. In 2018, 21.5 lakh TB cases were reported to the government, compared to 18 lakhs in 2017, an increase of 17% in one year. Moreover, notifications from private sector health care providers reached 5.4 lakhs, an increase of 40%, contributing to 25% of all TB notifications. The Government of India has also partnered with the Global Fund to launch JEET (Joint Effort for Elimination of TB), a private sector engagement program operating in 45 cities across the country. In the last year, with domestic resources, the Govt. of India through the NHM has also approved additional 120 cities across 19 states.

In April 2018, the government launched the Nikshay Poshan Yojana, a direct benefit transfer (DBT) scheme to provide nutritional support to TB patients. Under the scheme, TB patients have been receiving Rs. 500 per month for the entire duration of treatment. Since its inception, a total amount of Rs. 427crore has been paid to over 26 lakhs beneficiaries through direct transfers to their bank accounts.