Stresses on need for preventive and promotive healthcare 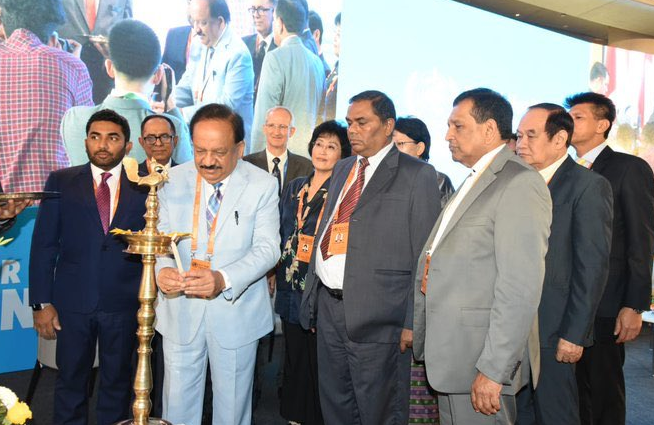 “Universal Health for all, a disease-free India and global standards of excellence in healthcare is our aim for a new India under the leadership of Prime Minister Narendra Modiji”. This was stated by Dr Harsh Vardhan, Union Minister of Health and Family Welfare at the inauguration of the ‘72nd Session of the WHO Regional Committee for South-East Asia,' in New Delhi

Dr Harsh Vardhan further stated that under the visionary Prime Minister, India is on the brink of a healthcare sector revolution and is moving with urgency to change the health landscape of India. “The Prime Minister has spelt out his commitment, in no uncertain terms, that the health of our citizens is his government’s topmost priority. The charismatic Prime Minister has fast-tracked many policy initiatives aimed at achieving all the core tenets of Universal Health Coverage to deliver affordable and inclusive healthcare for all,” Dr Harsh Vardhan elaborated.

Dr Harsh Vardhan was also unanimously elected as Chair of the 72nd Session of the WHO Regional Committee for South-East Asia.

Eight Ministers of Health from the 11 countries of the WHO South East Asia Region (SEAR), Smt Preeti Sudan, Secretary (HFW), Dr Poonam Khetrapal Singh, Regional Director, WHO South-East Asia Region were also present at the inaugural session. This is the second time that India is hosting the Regional Committee meeting; the previous one was also hosted by India in New Delhi.

Reiterating the commitment of the government, the Union Health Minister said that Ayushman Bharat is India’s road to Universal Health Care. The first component of this is establishing 1,50,000 Health and Wellness Centres by the year 2022, which shall provide an entire gamut of preventivehealthcare. We have already operationalized more than 20,000 Health & Wellness Centres. “The second component, Pradhan Mantri Jan Aarogya Yojana, is aimed at providing health protection cover to over 100 million poor and vulnerable families for secondary and tertiary care including pre- and post-hospitalization expenses. Key features include health cover of up to Rs. Five hundred thousand per family. A total of 17,000 hospitals have been empanelled so far under this scheme. More than 4.1 million persons have become beneficiaries under this scheme and have thus saved a total of an approximate120 billion Indian Rupees on health expenditure,” Dr Harsh Vardhan mentioned in his inaugural ceremony address.

As another component of preventive healthcare, the Union Health Minister further said that “We have charted out a plan to increase full immunization coverage to 90% people through intensification of campaigns under Mission Indradhanush. The range of diseases covered under Universal Immunization Program has also been increased with inclusion of Rotavirus, Pneumococcal and Measles Rubella Vaccines,” he added. Dr Harsh Vardhan further said that ending vaccine preventable diseases remains an important priority of the government.

Dr Poonam Khetrapal Singh, Regional Director, WHO South-East Asia Region stated that as governors of health in this region, it also requires that we look beyond our day-to-day concerns and the immediate horizon. She stated, “The flagship priorities have provided targeted focus and been responsible for a series of remarkable achievements. In advancing maternal and child health, tackling measles and rubella, in the battle against NCDs, NTDs, TB and AMR, the Region has performed with skill and determination”. She stressed that updating the Flagship Priorities, which we will do at this Regional Committee, will help ensure continued progress.