Baby Cleanne Papillon is perhaps the 3rd Miracle baby in the world with a shared heart, to have been successfully saved through Thoraco-pagus twins separation surgery 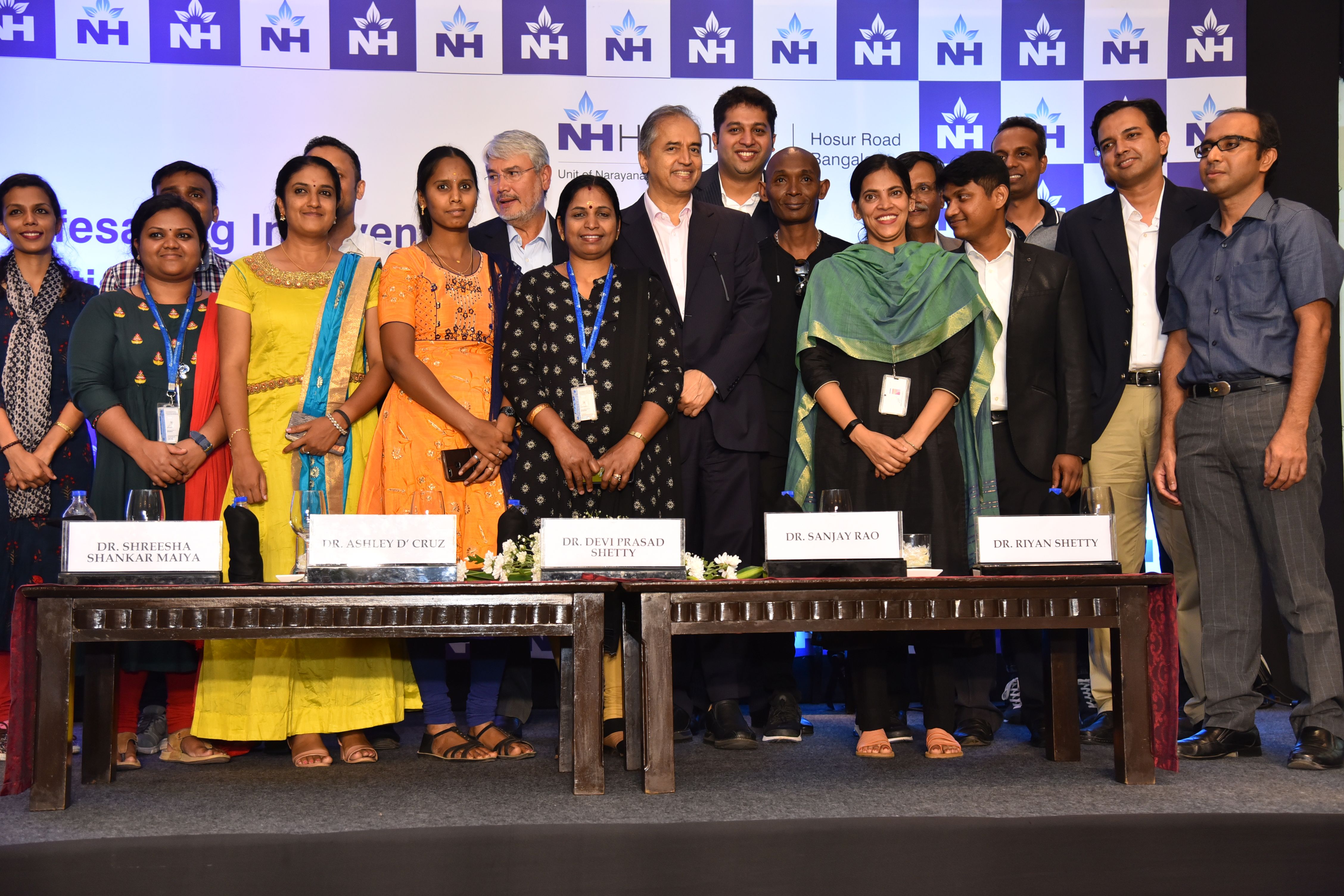 Team of doctors at Narayana Health City performed the world’s first PDA stenting as well as region’s first thoracopagus separation surgery and saved the life of baby Cleanne Papillon. Hailing from Mauritius, Baby Cleanne Papillon was one of the conjoined twins who had a shared heart with her sister.

Born to Mrs. and Mr. Ian Papillon, the babies were thoracopagus twins. Generally in thoracopagus twins the bodies are joined from the neck to the upper abdomen, however, in this case their heart were also joined. Instead of four chambers for each, together, they had seven chambers. As their survival required expert care, the Mauritian health department reached out to hospitals abroad. However, as it was a complex case with negligible chances for survival, many of the hospitals in Europe and other Asian countries were not open to consider the case. Narayana Health City stood up as a Good Samaritan and took up this challenging case owing to their vast experience in handling complex pediatric cases.

As the children shared a heart and were not in a position to even breathe, they were supported by hand pumps for oxygen through the journey. As soon as they arrived, the multi-disciplinary team under the aegis of Dr. Ashley D’Cruz, Director & Sr. Consultant Pediatric Surgeon & Urologist, Dr Sanjay Rao, Sr consultant – Paediatric Surgery and Organ Tranplant, Dr. Shreesha Shankar Maiya, Consultant – Paediatric Cardiology and Electrophysiology, Dr. Riyan Shetty, Consultant Critical Care Services & Head of Extracorporeal Life Support, Dr Ganesh Sambandamoorthy, Consultant – Anaesthesia & Critical Care and Dr. Harini Sreedharan, Consultant Neonatology, did a thorough examination of the babies. Considering the babies had a shared heart and survival chances were bleak, multiple specialties had to deliberate to find a way to save at least one of them. With the parents consent the team of doctors started the treatment. The doctors put them on intensive care. The intensive care team under the leadership of Dr. Riyan Shetty and Dr Ganesh Sambandamoorthy ensured the babies were stabilized faster. Once they were stabilized, PDA stenting was performed to improve the condition of the heart.

Elaborating about PDA (Patent Ductus Arteriosus) stenting, Dr. Shreesha Shankar Maiya, Consultant – Paediatric Cardiology and Electrophysiology said, “Open surgery was not a choice in this case as the children were conjoined from the thorax region. Further, their heart was fused and the chambers were merged making their case a complex and unsuitable one for any surgical treatment. PDA (Patent Ductus Arteriosus) stenting is interventional procedure wherein a stent is placed in the PDA and the blood flow from the heart is maintained. The intervention was successful and they were oxygenated well.”

While the intervention was successful, as staying together will affect both the lives, the doctors advised separation surgery. Though the babies were twins, one of them suffered from non correctable congenital anomalies. In fact, the unhealthy child was becoming more like a burden on the healthy baby and hence the parents along with the doctors chose to support the healthy child. They separated the babies. The tissues of sacrificed baby were used to reconstruct the torso of surviving twin.

Elaborating about the case, Dr. Ashley D’ Cruz said, “The survival rate in conjoined twins are minimal. In fact, the survival ratio of siamese twins with fused heart is even low. The child is the ‘3rd Miracle Baby’ in the world who has survived a Thoracopagus separation surgery.”

Expressing his gratitude, Mr. Ian Papillon, father of the patient said, “When we got to know that we are expecting twins, we were very excited. After the delivery when we were informed that our daughters were conjoined and were sharing a single heart we were shattered. We thought we will lose both of them. Today, we have at least one of our daughters with us only because of the doctors at Narayana Health and I am extremely thankful to them for that. We are also grateful to our government for funding my children’s visit and their treatment. While I am taking back one daughter, however for me she is mirroring for her sister as one.”

Baby Papillon has responded well to the intervention and is in a position to return to her homeland. Equipped with a team of multi disciplinary experts Narayana Health City has become one of the most sought after hospital to treat conjoined twins. The surgery makes Narayana Health City one of the few hospitals in the world to have successfully completed and saved 4 sets of conjoined twins and 1 case of parasitic twinning apart from this case.