How drones are revolutionizing the Indian healthcare sector 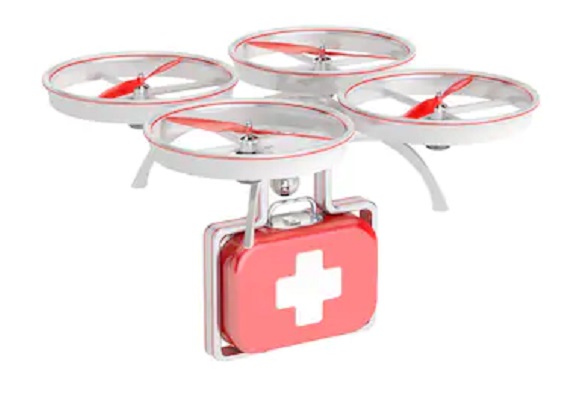 An unmanned aerial vehicle (UAV) - commonly known as a drone - is an aircraft without a human pilot on board; they were originally used for military missions too dull, dirty, or dangerous & for humans.

Drones have received considerable attention in India and India is one of a handful of countries with a Drone Policy as early as 2018. India is also home to dozens of Drone start-ups.

While geo-mapping, aid in precision agriculture, logistics & supply chain, and real estate & construction are the key industries where drone use is focused, healthcare is an area where drone usage is being experimented within India. This is noteworthy for its uniqueness and potentially high impact.

While the potential is very high and applications are maturing, I will talk of just three applications in this article-

“No lal batti: Chennai halts traffic to save life” was headline news on June 16, 2014, with a heart-warming story of City traffic police coordinating traffic signals to give uninterrupted green signal to an ambulance that carried a human heart from a dying donor in one hospital to another patient needing heart transplant in another hospital!

Such stories get repeated every other year from other cities including our own “Namma Bengaluru”. While such heroic efforts are laudable, they are not easy to replicate that too in scale for our country with 1.3 Billion people! This is one Drone application, if well planned, can be repeated routinely – not just for heart but other organs as well. With a large number of deaths in traffic accidents, and, larger percentage of the younger population aware and willing to donate organs, this assumes particular importance. It may be noted that drones as delivery vehicles are

o   small enough to cut across the city

o   big enough to carry the organs that too with the necessary temperature control, dust-free and infection-free environment

o   fast enough to reach in minutes and hours, that too right from the hospital operation theatres

Similar to organ transport, transportation of blood in case of rare blood groups, that too in traffic accident sites/cases of sudden impairment (heart/brain stokes) is an ideal use case for the use of drones.

Our metropolitan cities have become very large and traffic congestion on roads is very high. Blood transport often has time criticality that cannot be guaranteed by road transport. Also, in large hospitals movement within a hospital to the exact location of the specific patient needing donation, can add significant time that may be too costly.

Last, but not least, is the case of transportation of specialized medicines and toolkits. We all know that during the Covid-19 peak months (March to September 2020), Ventilators and Test Kits had to be air transported in large numbers across the length and breadth of the country; there were special challenges in transporting items to the North East States.

Even after the pandemic subsides, requirements of quickly transporting medicines and toolkits that too in the form of point-to-point transport, specialized conditions (air conditioning, dust, infection control) and speed make drones ideal candidates.

We have only indicated the most promising applications.

As Drone Policy matures, drone usage becomes more common and the Drone ecosystem evolves such civilian use of Drones will far exceed the military use that prompted Drone development. With software dominating the Drone scene, the Government Policies in place and with sensors/vision processing becoming very affordable, Indian healthcare application of Drones is at an exciting “take- off” stage.