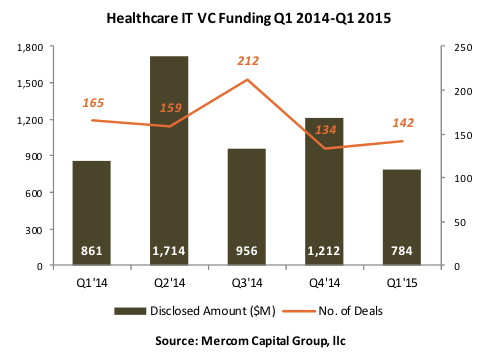 After registering high investments last year, the first quarter of 2015 has not been so impressive for digital health!

Mercom Capital Group, llc, a global communications and research firm, released its report on funding and mergers and acquisitions (M&A) activity for the Healthcare Information Technology (IT)/ Digital Health sector for the first quarter of 2015. Mercom's comprehensive report covers deals of all sizes across the globe.

Venture capital (VC) funding in the Health IT / Digital Health sector dipped by about 35 percent, coming in at $784 million in 142 deals compared to $1.2 billion in 134 deals in Q4 2014. Announced debt and public market financings in the sector amounted to $975 million in seven deals in Q1 2015 including one IPO, bringing the total corporate funding raised in the sector for Q1 2015, to almost $1.8 billion.
Health IT / Digital Health companies have now raised almost $10 billion in VC funding since 2010.

"Funding fell across the board with the exception of Mobile Health (mHealth), which was the bright spot this quarter. There was also significant M&A activity in the first quarter for mHealth companies. We have already seen 10 M&A transactions in Q1 compared to 21 in all of last year, which bodes well for exits in Mobile Health." commented Raj Prabhu, CEO and Co-Founder of Mercom Capital Group.

Consumer-centric companies raised $437 million in 98 deals this quarter compared to $643 million in 91 deals in Q4 2014. Mobile Health companies continued to attract the most VC funding bringing in $282 million in 56 deals, most of which went to mHealth Apps with $220 million. Telehealth companies secured $65 million while Rating and Comparison Shopping companies brought in $47 million.

In terms of disclosed transactions, Mobile Health came out on top with $578 million, led by two acquisitions from Under Armour. The largest disclosed M&A transaction was the $475 million acquisition of MyFitnessPal, a nutrition and fitness platform that allows users to track their health goals and provides nutritional information, by Under Armour. This was followed by the $325 million acquisition of Studer Group, a provider of healthcare consulting services and software, by Huron Consulting.

Performant Financial Corporation acquired Premier Healthcare Exchange, a provider of advanced cost management solutions for commercial health plans and third party administrators, for $130 million. HealthStream acquired HealthLine Systems, a provider of credentialing and contact center quality management software to the healthcare industry, for $88 million. Under Armour also acquired Endomondo, a developer of a mobile app and website that provides users a fitness community and allows them to track their workouts, for $85 million.

Announced debt and public market financing in Health IT rose to $975 million in seven deals this quarter compared to the $299 million in eight deals in Q4 2014. There was one Digital Health IPO in Q1 2015: Invalon, a data analytics solutions company, which raised $600 million.

There were a total of 546 companies and investors covered in this comprehensive report.