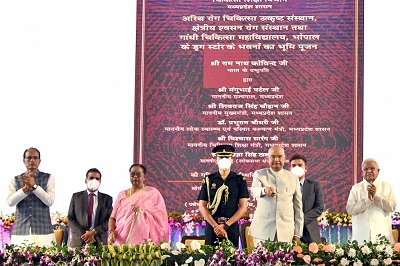 These include the establishment of the Regional Institute of Respiratory Diseases and Centre of Excellence for Orthopaedics under Gandhi Medical College, Bhopal and projects related to strengthening the health services in district hospitals and civil hospitals of Dewas, Sehore, Shajapur, Jabalpur, Indore, Morena, Ujjain and Bhopal etc.

Speaking on the occasion, the President said that it should be the endeavour of every government to provide affordable healthcare facilities to the people from all sections of the society. He expressed confidence that people of those areas will get better facilities after the completion of projects initiated today.

The President cited the example of Padma Shree Dr Leela Joshi who has been working for more than two decades to reduce the mortality rate due to anaemia in the tribal, rural and urban slums of the Ratlam district. He said that such dedicated doctors are needed for the success of the efforts of governments to provide health facilities to every person in society.