International Yoga & Naturopathy College to come up in Sikkim 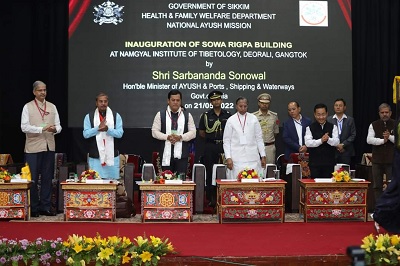 The Union Minister for Ayush and Ports, Shipping & Waterways Sarbananda Sonowal has announced major initiatives to boost the traditional medicinal practice including Sowa Rigpa, Ayurveda and Naturopathy in the state of Sikkim, on 21 May.

The Minister was attending the national workshop on Sowa Rigpa - the traditional and ancient medicinal practice of Himalyanan people in Sikkim.

The Ayush Minister announced that an International Yoga & Naturopathy College will be set up in Sikkim which will boost the medical tourism sector in the Northeast India.

A 30 bedded Sowa Rigpa Hospital is going to be set up in Sikkim. Furthering the Ayush initiatives in the Northeast region, the Union Minister announced setting up of Yoga & Wellness centre at every Gram Panchayat level in the state along with an Ayurveda Medical College under Satellite Institute programme in Sikkim.

Highlighting the importance of Ayush based growth in the region, the Union Ayush Minister also said that the Ministry is exploring the possibility to set up a Research Council for Sowa Rigpa.

The two day workshop was organised by the National Institute of Sowa Rigpa (NISR), under the Ministry of Ayush in collaboration with Namgyal Institute of Tibetology (NIT) at Gangtok in Sikkim.