According to the report, the average HbA1c level of the country was recorded at 8.48 per cent from October 2019 to September 2020 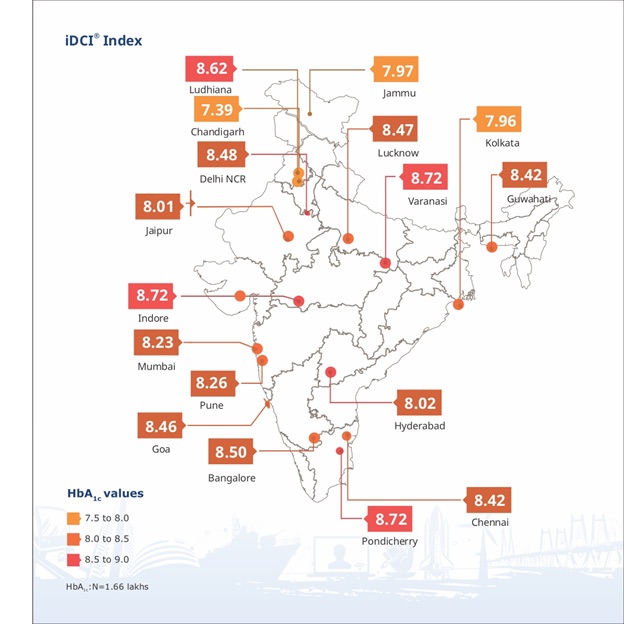 In the run-up to World Diabetes Day, the Novo Nordisk Education Foundation has unveiled the second-year report of its Impact India: 1000-Day Challenge’ programme. The programme was launched two years ago with an ambition of reducing the HbA1c levels of people with diabetes in India by 1 per cent over the next 1000 days, thereby reducing the risk of complications and the economic burden associated with diabetes.

According to the report, the average HbA1c level of the country was recorded at 8.48 per cent from October 2019 to September 2020. Though the average HbA1C level has decreased marginally compared to last year’s figures, the prevailing high HbA1c levels is a matter of deep concern especially in the light of the COVID-19 pandemic which puts people with uncontrolled diabetes at a higher risk of a fatal outcome and serious health complications. The data collection exercise for the iDCI was conducted across 30 Indian cities. The average respondent age was 55 years, of which 57 per cent were males and 43 per cent female.

iDCI (Indian Diabetes Care Index) was introduced in the year 2018 as part of the programme to improve diabetes care in the country. Based on big data analytics, iDCI has been providing a real-time view of the average HbA1c in India.

At present, more than 77 million people are living with diabetes in India and country’s annual spend is approximately Rs 64,500 crore on diabetes related healthcare which is further expected to increase if diabetes is not controlled.

Amidst these COVID-19 pandemic times, a few cities have shown a drop in their HbA1c levels from Jan-June 2018 to July-Sep 2020. These include Hyderabad, Kolkata, and Jaipur but the majority of Indian cities have seen an upsurge in HbA1c levels.