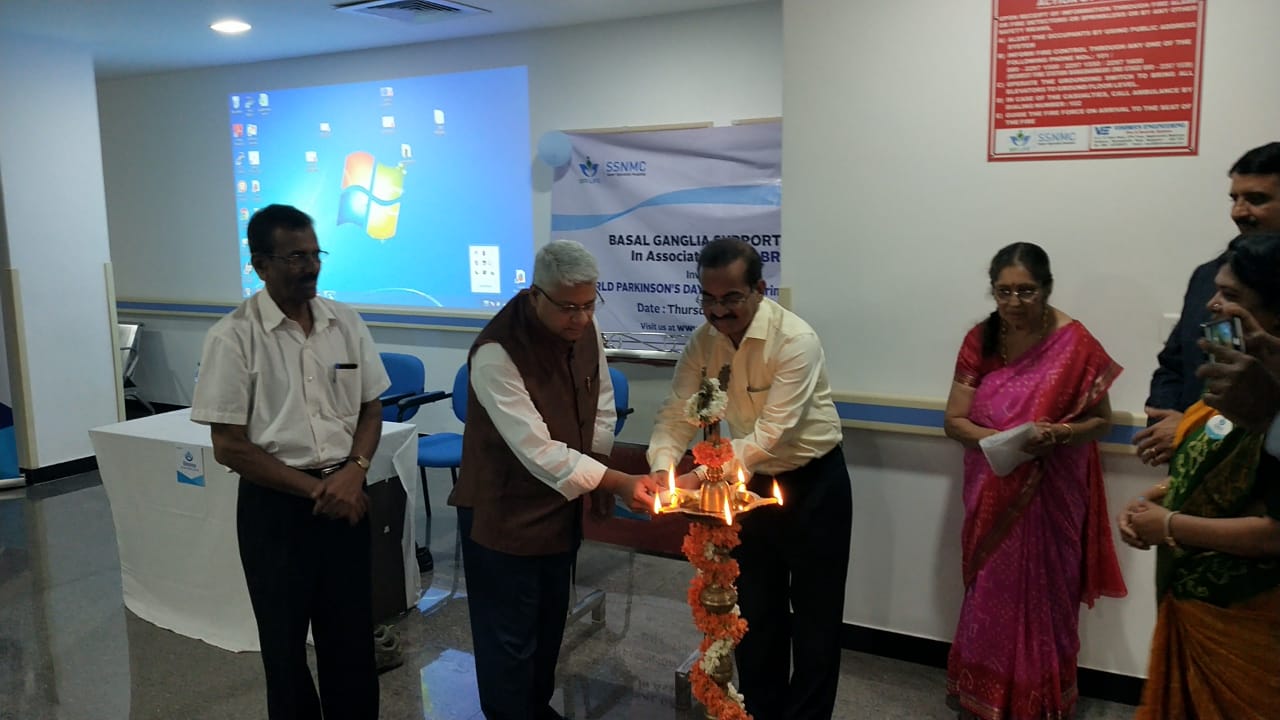 Basal Ganglia Support Group, a unit of Brains Hospital recently organized the World Parkinson’s Day to educate and empower patients of Parkinson’s disease and their caregivers.

Speaking on the occasion Dr. NK Venkataramana, Founder Chairman& Chief Neurosurgeon, Brains Hospital said: “The prevalence of Parkinson’s disease is increasing in India every year. Even though it is mostly seen among the elderlies, above 50 years old, stress and modern lifestyle has contributed largely in the rise of this neuro-degenerative disorder in young adults today. In addition, a group of autoimmune disorders and Genetic disorders are contributing to the young onset Parkinson’s disease. Also, taking care of these patients is becoming difficult owing to lack of knowledge about the therapeutic treatment. Hence, support groups like Basal Ganglia helps the patients and their families to understand the illness in general and get better prepared to face the problems “.

Basal Ganglia Support Group started for Parkinson’s patients and their care givers in 2007 by Mrs. BR Radhamani and Dr. NK Venkataramana. Today, the group has over 140 members & their families who meet once in three months to discuss about the therapies as well as a variety of day to day problems thereby, improving the quality of life.

Despite relentless efforts involving the most powerful medical brains and technologies, Parkinson’s disease has thus far eluded cure. Every year this deadly neurodegenerative/autoimmune disease cripples millions of people around the world.

There are an estimated 6.3 million people living with this disease around the world. In the last 20 years it has grown from 20 per 15 million to 5000 per 5 million thus contributing to the disease burden across the global.

However, in the recent years more and more young people are being affected with this disease 3 to 5 % of total PD patients belong to young onset group.

At the event, over 50 Parkinson patients and their caregivers were counselled by eminent experts—neurologists, neurosurgeons, physiotherapists, speech and occupational therapists—on the best ways of understanding and coping with the disease.

Speaking about the medical management aspect of Parkinson’s Disease Dr Aravinda R V, Consultant Neurologist, Brains Hospital he said how correct dose and right medication is important in treating Parkinson’s. He related about a few of the unique Parkinson’s cases which he handled at the hospital successfully.

“Along with the treatment, a good diet is highly important for Parkinson’s patient as this helps in keeping their bone healthy, prevent side effects of medicine like dry mouth and also constipation” said Dr Sreemathy Venkataraman, Clinical Nutritionist, BRAINS Hospital.

Dr AadilRashidwani, Chief Physiotherapist, Brains Hospital, explained about the different therapies available which helps in the treatment of Parkinson’s disease.

There have been several advances in the management and treatment of Parkinson’s disease. Of all these, aqua-therapy is one of them. Saddam Hussain, Aqua-therapist at Brains Hospital explained about few of the best aqua exercises and how it has helped patients.

Meanwhile, present on the occasion renowned yoga therapist Dr Deepak B Hadagali demonstrated a few of the yoga asanas that actually helps in improving quality of life in Parkinson’s patients.

Dr N K Venkataramana spoke about the surgical treatment for the Parkinson’s disease, the options & opportunities.  At the end there was an interaction with the patients, families & the specialists which was the highlights of the program.