The oxygen plants have been established under PM CARES 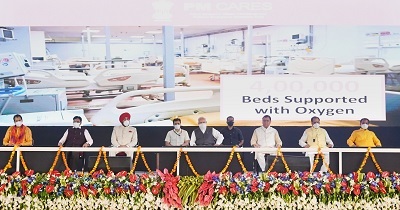 All districts of the country will now have commissioned PSA oxygen plants. Union Ministers, Governor, Chief Minister of Uttarakhand, State Ministers and healthcare professionals were present on the occasion.

The PM said in normal days, India used to produce 900 metric tonnes of liquid medical oxygen a day. As the demand increased, India increased the production of medical oxygen by more than 10 times. He added that this was an unimaginable goal for any country in the world, but India has achieved it.