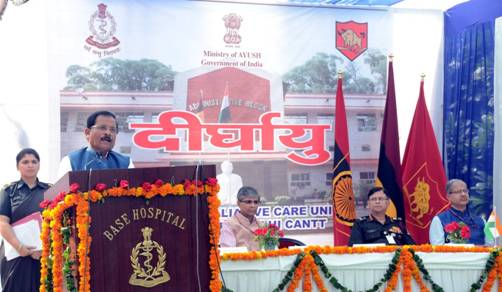 On this occasion, a Memorandum of Understanding (MoU) was also signed between Ministry of AYUSH and Ministry of Defence for the Integration of AYUSH under the health establishments of Directorate General of Armed Forces Medical Services (DGAFMS).

In his inaugural address, the Minister said that our Army soldiers work in very challenging environmental conditions right from Glaciers of Siachin to the Desserts of Thar, which takes a toll on their physical as well as mental health. He said that Ayurveda and Yoga can help the soldiers of Indian army to attain the best of physical and mental health and can improve their endurance. Naik further informed that Ayurveda medicines and Panchkarma procedures like Snehana and Swedana are very effective in treating the Work Related Musculoskeletal Disorders (WRMSDs).