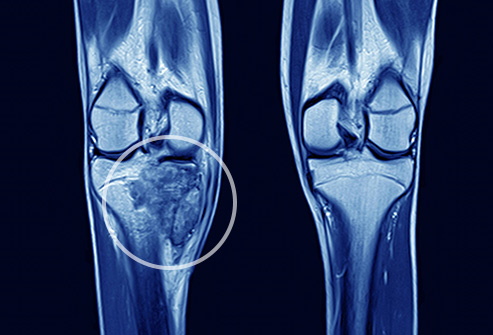 Doctors at Narayana Health City performed pedicle cryotherapy, a new procedure to treat bone cancer in 28 year old patient suffering from bone cancer. The procedure not only cured her from bone cancer, it also allowed her to retain her natural bone.

Pedicle cryotherapy is one of the newer surgical techniques. Unlike, in the traditional form of surgery wherein the cancer affected bone is cut at two ends, removed from the body and the section replaced with an artificial bone, in pedicle cryotherapy only one end of the affected bone is cut. The treatment is done keeping the other end in continuity with the limb and the surrounding muscles, tendons as well as soft tissue. The affected area is dipped in liquid nitrogen. Liquid nitrogen produces temperature of -195 degree, which kills all the tumor cells. Once the cells are destroyed the same bone is put back in its original position and fixed with a plate.

The patient underwent surgery under the aegis of  Dr Suman Byregowda, who did a wide local excision of the involved part of the thigh bone and around 20 cm of thigh bone containing the tumour was dipped in liquid nitrogen, sterilized and positioned back in the same place and fixed with a plate. The bone healed completely in 3 months. As the treatment protocol requires chemotherapy she was advised to undergo chemotherapy for 5 months post the surgery healing.

Elaborating about the advantages of pedicle cryotherapy, Dr. Suman Byragowda, Musculo-Skeletal Oncosurgeon, Narayana Health City, said “The biggest advantage of pedicle cryotherapy is it allows the patient to do any activity without restriction. As traditional surgery inserts an artificial metal bone, the patient is restrained from sitting on the floor or doing any physical activity that exerts pressure on the legs. Another advantage is that the recovery is much faster as the normal bone and soft tissue structures are not damaged. Further, in pedicle cryotherapy, the cost is almost half of the standard procedure as it obviates the need for metallic bone / prostheses. It also eliminates the need for revision surgeries that come with prostheses. The metal bones do not last more than 15 years and require replacement every decade. Further, apart from well trained and skilled orthopedic oncosurgeon and Operation theatre and supporting staff, the procedure doesn’t need high end machines and infrastructure like bone banks or Radiotherapy bunks.”

Bone cancers are rare tumors accounting to only about 1-3 % of all types of cancers. Few years back, bone cancer was considered to be as a dreaded disease. Today with the advent of modern surgical techniques, chemotherapy and radiotherapy it is possible to save the limb in more than 90 percent of patients and cure cancer completely in about 60-80 percent of patients compared to just 20% patients earlier.