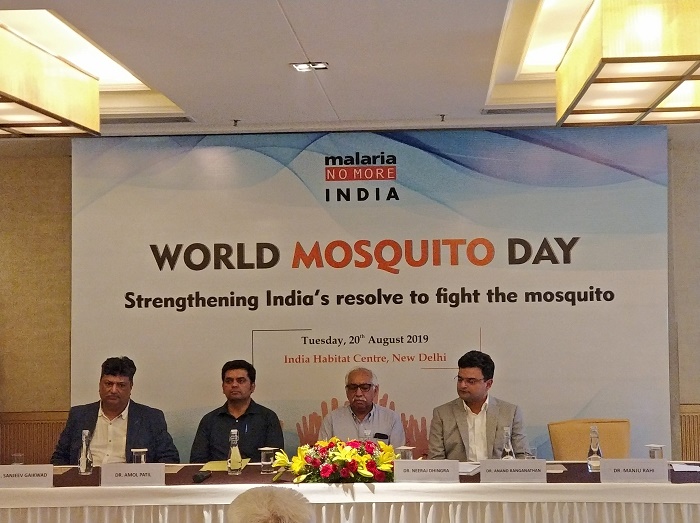 On World Mosquito Day, Malaria No More India, launched its flagship campaign India Against Mosquito in New Delhi to create a mass movement for collective action to build mass awareness and promote innovative solutions for controlling the mosquito – the common enemy for many diseases.

World Mosquito Day is celebrated every year on 20th August in the commemoration of Sir Ronald Ross’ discovery of malaria transmission by mosquitoes. Despite the progress being made by the country, India continues to struggle in its battle against the mosquito. An expert consultative workshop was held in the capital to discuss technical and communication challenges faced by the country.

The workshop was inaugurated by Dr. Neeraj Dhingra, Director, National Vector Borne Disease Control Programme (NVBDCP), in the presence of other experts from the scientific and media backgrounds.

Speaking on the occasion, Dr. Dhingra stressed on the commitment to curb vector-borne diseases, “Improving health outcomes is a shared responsibility of all the stakeholders. Malaria No More India’s efforts to raise awareness and promote community action against the mosquito is truly commendable. Increased awareness and practical approaches to manage the vector can go a long way in setting the country up for elimination from mosquito-borne diseases.”

Malaria No More India Country Director, Dr. Sanjeev Gaikwad stated, “We want to make #IndiaAgainstMosquito campaign a mass movement. New and traditional media along with celebrities will play a major role making it a truly national movement. We will need high-level political commitment, media and society to participate in this campaign together, to be able to win the war with mosquitoes.”