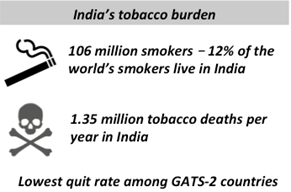 A recent paper on The Prospects of e-cigarettes in India: Overview of Evidence, Opportunities and Challenges Based on Experience in Western Countries by Konstantinos Farsalinos, Christopher Russell and Rajesh Sharan evaluates evidence from western countries, their regulations and provides insights on how India too can develop an appropriate framework to maximize the potential of e-cigarettes to complement available tobacco control measures and minimize adverse public health effects.

The paper highlights that not only are e-cigarettes significantly less harmful, but that in the past few years, countries like UK, US, New Zealand, UAE, Canada that have set out pragmatic regulations for e-cigarettes have witnessed unprecedented decline in adult smoking rates. These findings position e-cigarettes as a viable alternative to reduce tobacco smoking, and make a strong case for regulating the sector, to address issues of quality, labeling, promotion and sales, and to ensure that e-cigarettes are made available to adult smokers to reduce their personal health risk.

India is home to nearly 12% of the world’s cigarette smokers, and an even larger section of the population uses other forms of tobacco including smokeless tobacco (SLT) such as khaini, gutkha, zarda, or local smoking tobacco like bidi, hookah, chillam, or a mixture of these. The World No Tobacco Day, which is observed to create awareness on harmful effects of tobacco use and discourage its use is an opportune time to explore how alternatives to cigarette can support lowering India’s staggering tobacco death rate of 1.35 million per year.

It is pertinent to note that, India is a member of the WHO Framework Convention on Tobacco Control (FCTC) and is bound by MPOWER policy recommendations to reduce tobacco demand. The Indian Government must consider its on-ground implementation with practical solutions that help bring down tobacco consumption rates. Despite the awareness programs and expenditure towards educating about the health consequences, India has the lowest quit rates among the GATS-2 countries.

This begs the question - Why is India not exploring the Tobacco Harm Reduction (THR) policies which aim to prevent or reduce harm by promoting substitution of combustible tobacco with less harmful non-combustible sources of nicotine? These products are already being used to support existing tobacco control measures especially in developed countries like United Kingdom, Canada and the United States.

Electronic cigarettes (e-cigarettes), an increasingly popular THR tool, have been the focus of intense public health debate. From a safety perspective, compared to e-cigarettes, cigarette smoke contains thousands of chemicals, many of which are carcinogenic and toxic. E-cigarettes, on the other hand, do not contain tobacco, and the ingredients of e-cigarette liquids in controlled quantities reduces risk that a smoker would otherwise be exposed to by an order of magnitude. A risk assessment analysis by Stephens WE had concluded that carcinogenic risk of e-cigarettes is about 0.4% that of smoking, and based on currently available evidence, there is little doubt that e-cigarettes are far less harmful than smoking.

As per a study by Population Assessment of Tobacco and Health (PATH), cigarette smokers who initiated e-cigarette use had 7.88 times the odds of switching to 30-day cigarette cessation compared to non-users of e-cigarettes. In US, tobacco use data from 2010 to 2015 showed a substantial increase in e-cigarette use. The data on prevalence and growth of e-cigarette also presents a very strong correlation with significant increase in cessation rates in the US.

The UK and European Union regulatory framework for e-cigarettes includes quality standards, nicotine concentration limits, marketing restrictions, and can easily be modified for implementation in India. In fact, the UK Department of Health has also pledged to support adult smokers in switching to less harmful nicotine products like e-cigarettes, while also maintaining that complete cessation is the ideal solution. The country’s liberal approach has paid off, as UK witnessed record-breaking decline in the adult smoking population. In 2017, the lowest ever smoking rate of 15.1% was recorded in UK. Smoking prevalence among young adults in UK has also declined by 25% since 2011. Encouraged by the impact thus far, the UK Commons Science and Technology Committee recently concluded that regulations on e-cigarette licensing and advertising should be further relaxed.

It is imperative that India learns from the experience of other countries, and provide tobacco users with a less harmful alternative, rather than prohibiting e-cigarettes and missing out on an unprecedented opportunity to help adult smokers in India.