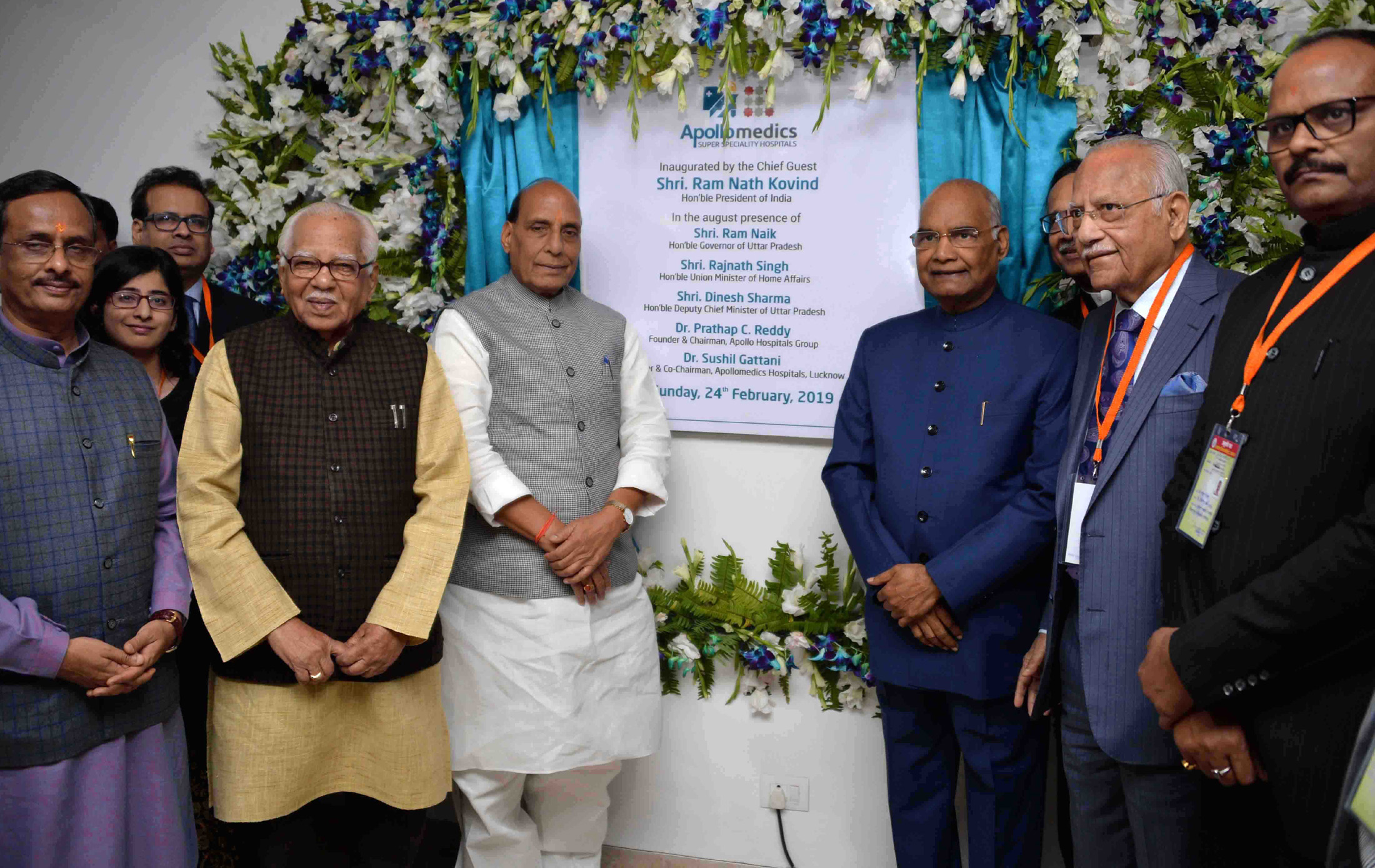 Speaking on the occasion, the President emphasised the importance of quality and affordable healthcare in the country, and particularly in Uttar Pradesh. He pointed to the successes in meeting the challenges of traditional infectious and communicable diseases, and also to the changing disease patterns in the country that are giving rise to greater cases to non-communicable or lifestyle ailments.

In this context, the President said, the Ayushman Bharat programme, launched in 2018, will go a long way in providing medical cover, especially to underprivileged citizens.

The President said, ”quality health for everybody was a shared goal. As such, he was happy the government, civil society, private and charitable institutions and other stakeholders were working together. The Apollomedics Super Speciality Hospital would provide state-of-the-art medical care to the people of the state and the region at a reasonable cost.”

Speaking at the inauguration, Ram Naik, Governor of Uttar Pradesh welcomed Apollomedics Super Specialty Hospital in Lucknow and expressed happiness that this hospital is now ready to serve the people of Uttar Pradesh. He lauded the Prime Minister of India, Narendra Modi for his contributions to the development of the country.

He said that, “The hospital is set to cater to lakhs of patients in Lucknow and cities which border the region. The people of Uttar Pradesh, over many decades, have been seeking Apollo’s services in Delhi and other states. Their continued faith and trust in the high quality of care is greatly valued and it is expected that they will expand their footprints in the region with medical services in the state.”

Rajnath Singh said, “Apollomedics Super Speciality Hospital will prove to be a model for other hospitals in the city. The healthcare facility is open to all patients not only for Lucknow, but also from across Uttar Pradesh, and from other countries as well. With Apollomedics in the city, Lucknow is set to become an important centre for quality treatment and cancer related ailments.”

Talking about the medical tourism Rajnath Singh said, “India has become one of the major destination, and private hospitals have played an important role to promote medical tourism. He said the Government is also constantly working to make healthcare affordable and available to all the people of the country with Ayushman Bharat scheme where Rs.5 lakhs cover has been provided to each family for the medical treatment.”

Speaking on the occasion Dr. Prathap C Reddy said, “In our endeavour to bring the finest healthcare services to the people of India, we at Apollo have always relentlessly pursued going closer to our patients, which is the reason why we established 71 hospitals across the country. Over the decades many patients of Uttar Pradesh treated at Apollo Hospitals in other cities expressed their wish that we bring our service to the heartland of India, i.e. Uttar Pradesh. With the launch of Apollomedics Super Speciality Hospital in Lucknow, our 72nd hospital, I am happy that we are now able to go even closer to the people of the state with the best in class health care services they can look forward to.”

Suneetha Reddy said, “In modern times, Uttar Pradesh has become a bellwether of the mood of the nation. The development of Uttar Pradesh, and its social and economic prosperity, is in the interest of every citizen of this country, because when Uttar Pradesh does well, India does well. That is why we are excited to inaugurate Apollomedics Super Speciality Hospital in Lucknow, in partnership with some of the finest clinicians in this part of the country. It will serve patients across 30 specialities, and is equipped with cutting-edge technology and treatment protocols.”

Dr. Sushil Gattani, Founder & Co-Chairman, Apollomedics Super Speciality Hospital said, “This will be one of the largest hospitals in the city, and also one of the most advanced healthcare providers. Apollomedics has a dynamic team of highly experienced Doctors, Nurses and Paramedical technicians in place to ensure seamless delivery of medical excellence at every level of patient care. We hope to make quality healthcare more accessible in this part of the country so that people of Lucknow and nearby places do not need to travel to long distant cities for quality treatment.”