1 in 20 Indians Affected by a Rare Disease: ORDI 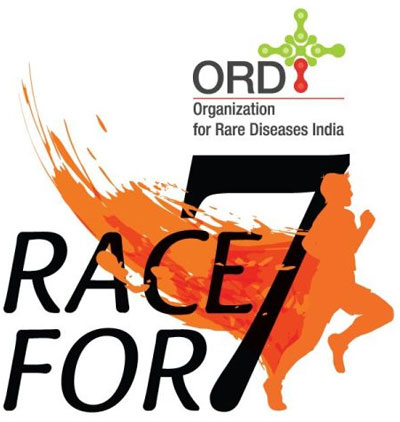 The Organization For Rare Diseases India (ORDI), a not for profit organization committed to addressing the challenges of the rare disease community in India, today announced Race for 7, a multi-city run/walk to raise funds and awareness for rare disease patients in India. Race for 7, a first of its kind event for rare diseases in the world, symbolically represents 7000 rare diseases with 7000 people running for 7 kilometers to represent the average number of years it takes to diagnose a rare disease. The run is organized in Mumbai on February 24, Sunday.

Although an estimated 1 in 20 Indians suffers from a rare disease, lack of awareness and information has created several challenges for patients and their caregivers, most importantly delayed diagnosis, affordable and targeted care and treatment and access. Besides members of the general public, several rare disease patients and their families will participate in Race for 7 to draw attention to the challenges they face and the need for governments and other institutions to recognize their unique needs and create enabling policies and a more supportive environment for them.

Race for 7 is held in the month of February to commemorate World Rare Disease Day which falls on the last day of February. The theme for Rare Disease Day 2019 is ‘Bridging health and social care’, focusing on the need to better coordinate all aspects of care to improve the lives of people living with a rare disease. What started as an awareness walk to commemorate World Rare Disease Day in February 2016 has now grown into a significant campaign, conducted simultaneously in multiple cities and two countries – India and the USA. Over the years, the run has expanded and in 2019it will be conducted over February and March across 10 Indian cities – Bengaluru, Mysuru, Chennai, Kolkata, Mumbai, Jaipur, Coimbatore, Bikaner, New Delhi, Thiruvananthapuram, Kochi.

Prasanna Shirol, Founder Director, ORDI, and father of a rare disease patient, says: “One in every 20 Indians suffers from a rare disease. almost half of whom are children, an important fact that often doesn’t get highlighted. Besides lack of access to early intervention and treatment because of the lack of widespread awareness about rare diseases, the cost of treatment where available is often prohibitively expensive. We urgently need national and state policies that address the unique requirements of the rare disease community and enable them to lead lives of dignity and self-worth. We also need institutions like corporates and schools and colleges to create a more inclusive environment for rare disease patients.”

“IQVIA is delighted to be associated for the fourth consecutive year as the main sponsor of Race for 7, an event that has been growing in stature and impact. While rare diseases, by virtue of their definition, affect relatively fewer number of patients, the overall number of rare disease patients is large enough to warrant more focused attention. We hope that the public will come forward in large numbers to participate in Race for 7 and help amplify the voice of the rare disease community. Race for 7 is a unique way of engaging the community with those who matter most –patients and their caregivers - for a common cause,” said Amit Mookim, Managing Director, IQVIA – South Asia. Rare Diseases is a key therapeutic focus for IQVIA who has provided clinical services for more than 258 rare disease studies in 87 countries worldwide since 2011.

Shital Bhatkar, mother of a rare disease patient and ORDI - Coordinator for Maharashtra and Founder, With Arya, “Events like Race for 7 help increase awareness about rare diseases and create a platform for disease specific parent support groups like With Arya, Cure SMA , IPWSA, support group for Neiman Pick disease, to come together for the unified cause of the rare disease community.”

Prasanna added the importance of having a rare disease policy and an Orphan drug Policy for holistic management of Rare Diseases for patients, in absence of any health care policy /insurance coverage and to support the Industry to develop newer drugs and research respectively.