Point of Care Testing Market to surpass $34B by 2024: Global Market Insights 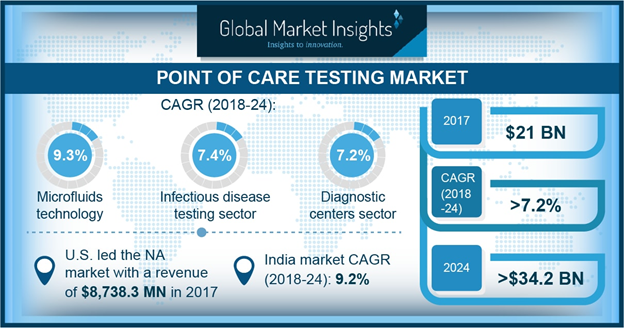 As per a recent industry report put forward by Global Market Insights Inc., Point of Care Testing Market is forecast to register its name in the billion-dollar fraternity down the line of seven years, by exceeding a revenue of USD 34.2 billion by 2024 with a projected CAGR of 7.2% over 2018-2024.

Increase in number of pathology labs and services equipped with advanced diagnostic equipment in North America will be one of the major factors driving the growth of POC testing market. Healthcare infrastructure development has resulted in the industry growth. Majority of the population staying in developed countries rely on healthcare facilities developed by the public healthcare sector, that will positively impact the industry growth.

As per the report, “Molecular diagnostics holds significant role in the field of microbiology. Conventional culture method is not helpful in obtaining timely results. Molecular testing technology allows nucleic acid detection directly through amplification and screening of sample. Real time PCR is used for this purpose. Industry players have been focusing their efforts on developing new point of care molecular diagnostic technologies to deliver faster results with high accuracy and specificity.”

“Pregnancy and fertility testing products market held a significant amount of market share in the year 2017 and was valued around USD 2,384.7 million. Factors such as heredity, late child bearing and changing lifestyles are the major risk factors that lead to infertility. Hence, increase in number of infertility cases will significantly contribute to assisted reproductive technology market growth in forthcoming years”, reports elaborates.

Solid phase technology market is estimated to witness a growth of 9.2% during the forecast time period. Presence of HIV antibodies will result in a spot or dot with the help of a signal reagent. Such tests have high sensitivity and are designed to aid in the diagnosis of diseases along with the determination of antibody levels, thereby driving the segmental growth.

Prescription-based testing market was valued around USD 8,640.0 million in the year 2017. Diagnostic uncertainty escalates the risk of unnecessary antibiotic prescribing hence point of care testing is considered as key to rational prescribing. Issuance of such guidelines favoring use of point of care testing will drive segmental growth over the forecast timeframe.

Germany dominated the Europe POC testing market and was valued around USD 1,717.4 million in the year 2017. In the Federal Republic of Germany, point-of-care systems are increasingly used within hospitals and medical practices. Other medical facilities where point of care testing is widely used includes outpatient nursing care, pharmacies and home visits.

Japan POC testing market is projected to grow at a CAGR of 8.7% over the projection period. As per the statistics published by the World Health Organization (WHO), more than 20,000 people were suffering from HIV and tuberculosis in Japan in the year 2016.