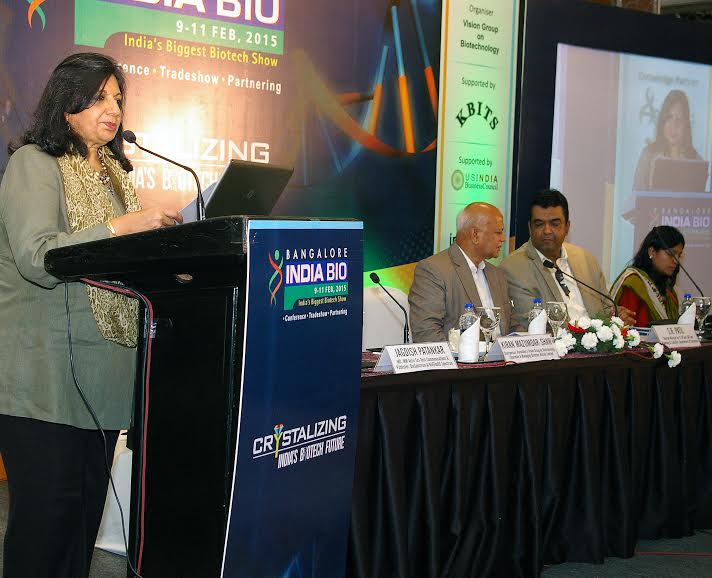 This annual biotechnology (BT) event is organized by the Department of IT, BT and S&T, Government of Karnataka, Vision Group on Biotechnology and MM Activ Sci-Tech Communications.

The trade show will have a special 'IT4BT Pavilion' to bring the IT and BT fraternity under one roof showcasing the latest technologies and to understand the industry requirements.

The BIB is expected to witness about 100 exhibitors, 3000-plus business visitors, and international representations from more than 20 countries including the USA, France, Australia, Canada, Germany, Netherlands, Belgium, Korea, Taiwan, Malaysia and other Southeast Asian countries. The Bangalore India Bio 2015 will also allow young researchers to present their innovations through 'Poster Sessions - Walkway of Discovery'.

"The Prime Minister has initiated the 'Make in India' mission, which is about manufacturing and 'Swacha Bharat Abhiyan' dealing with cleanliness, hygiene and sanitation. In both these initiatives, biotechnology has a role to play. Through this, the government is keen to enact biomanufacturing and fermentation manufacturing, presenting India with enormous opportunities," added Dr Kiran Mazumdar-Shaw.

"There are emerging opportunities where Bangalore-based companies are doing what it takes to become globally relevant in the area of biofuels and other aspects of biotechnology," Dr Mazumdar-Shaw further opined.

Dr Mazumdar-Shaw also opined, "The round table conference called 'Secretaries Conclave' will help share, discuss and deliberate on issues, coming up with meaningful outcomes of what they believe should be the roadmap. This event will be a platform for young entrepreneurs, venture capitalists, and angel investors offering a glimpse of happenings inside the biotech sphere."

Speaking about Bangalore being the IT and BT start-up capital, Dr Mazumdar-Shaw emphasized that most biotech start-ups today are genomics-led. "Genomics is one area where India can play a leadership role. Bangalore is privileged with a powerful ecosystem for genomics, in both public and private sectors."

She said that the major challenge for India now is making genomics cost effective. She added, "India stands for high science at low cost. This is what we need to leverage and excel at and find a rightful place in the global biotech arena."

Dr Mazumdar-Shaw also said that knowledge about biomedical technologies is growing by leaps and bounds. "The biomedical area is a vibrant space and a large number of start-ups are seen in this area. By combining IT and BT aspects, new diagnostic tools are developed. It is an exciting time for entrepreneurs, investors, and also for big companies to further build on their critical mass," she concluded.

Mr SR Patil felt that agri-biotech needs to be developed first since India is predominantly an agricultural nation. "India's economy is dependent on agriculture. Farmers are the backbone of our nation. Unless agriculture is developed, farmers will not be empowered to strengthen our economy," he explained.