A mechanized hand from an Oregon Uni research team

A mechanized hand from an Oregon Uni research team 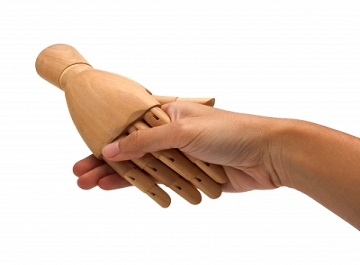 The device is tested in cadaver hands

Researchers at Oregon State University have developed a mechanized human hand that will help facilitate movement and restore the gripping capability of hands following nerve damage. It is said to be one of the first instruments created that could improve the transmission of mechanical forces and movement inside the body. The device was tested in cadaver hands.

The new mechanism is a passive technology using a basic pulley that when implanted within a person's hand will allow for a more natural grasping function with less use of muscle energy.

"This technology is definitely going to work and it will merge artificial mechanisms with biological hand function," said Mr Ravi Balasubramanian, an expert in robotics, biomechanics, and human control systems, and assistant professor at the Oregon State University.

New research demonstrates how the mechanism developed for this problem can produce more natural and adaptive flexion of the fingers needed for grasping. The force needed to close all four fingers around an object was reduced by 45 percent, and the grasp improvement on an object reduced slippage by 52 percent.

"The long-term potential of such mechanized assistance is profound. In some cases, it may indeed be possible to create joints or limbs that mechanically function as well or better than they did originally," said Mr Balasubramanian.

Technology such as this may offer new options to people who have lost the use of their hands due to nerve trauma, and ultimately be expanded to improve the function of a wide range of damaged joints in the human body, the researchers said.

"The impact can be devastating, since grasping is a fundamental aspect of our daily life. The surgery we are focusing on is commonly performed in the military on people who have been injured in combat," Mr Balasubramanian added.

The findings are reported in the journal Hand.